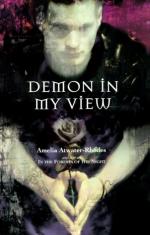 Amelia Atwater-Rhodes
This Study Guide consists of approximately 17 pages of chapter summaries, quotes, character analysis, themes, and more - everything you need to sharpen your knowledge of Demon in My View.

Demon in My View Summary & Study Guide includes comprehensive information and analysis to help you understand the book. This study guide contains the following sections:

This detailed literature summary also contains Topics for Discussion on Demon in My View by Amelia Atwater-Rhodes.

"Devil in my View" is the second novel in Amelia Atwater-Rhodes' Den of Shadows series. In this novel, Jessica Allodola has written multiple novels about vampires, one of which has recently been published under the pseudonym of Ash Night. The new school year has just begun and two new students have come to Ramsa High School, Caryn Rashida and Alex Remington. While Caryn simply annoys Jessica with her overtures of friendship, Jessica finds herself instantly attracted to Alex who reminds her of the main character of her books, Aubrey. Over a short time, Jessica becomes close to Alex. Therefore she is not terribly surprised when Caryn tells her that Alex really is Aubrey and everything Jessica has been writing about in her novels is true. "Devil in my View" takes an author down an amazing road that she has desired longer than she realizes, giving Jessica all the answers about her past she has always yearned to know.

Jessica dreads the first day of school because she knows that she will be treated like a pariah as she has in the previous four years she has attended school in Ramsa. Jessica is not completely wrong. However, new student Caryn Rashida tries to befriend Jessica when they meet in homeroom. Although Caryn is extremely nice and patient, Jessica blows her off. The following day, another new student joins the same class, Alex Remington. Caryn looks frightened when she sees Alex, but Jessica is fascinated with this boy who bears a striking resemblance to the main character in her books, "Tiger, Tiger" and "Dark Flame", Aubrey.

Jessica finds herself watching Alex as they move about the school day, finding more and more about him that resembles the fictional Aubrey, even the pendant he wears around his neck. At lunch, Alex seeks Jessica out and they talk for a while, sparring verbally in an exciting way. After school, they run into one another again at the local bookstore. However, Alex rushes out of the store in anger when he sees the copy of Tiger, Tiger Jessica is holding. It turns out that Alex really is Aubrey, that he knew about "Dark Flame", but had no clue about "Tiger, Tiger." Aubrey has been urged to kill Ask Night, whom he has discovered is Jessica, to prevent her from publishing any more books that reveal truths about vampires to their enemies, witches who are vampire hunters.

Aubrey is fascinated with Jessica and, despite pressure from other vampires, finds himself unwilling to kill Jessica. Caryn does not see this reluctance in Aubrey, however, and she goes to Jessica to warn her about the danger she is in. When Caryn gives Jessica a note that has her real name on it, Smoke, Jessica begins to understand that her books are true. Jessica searches for New Mayhem, the capital of vampire activity in the United States, and is less than surprised to find it just where she always imagined it to be. However, threats from Fala, another vampire, send Jessica back home.

Fala decides to take matters into her own hands. On Sunday morning, Fala sends a vampire to kill Anne, Jessica's adoptive mother. Upset, Jessica goes home with Caryn and her witch mother and vampire hunter cousin, Dominique. When Jessica has another of her recurring dreams about a woman named Jazlyn that mentions a woman named Monica Smoke, Jessica questions Caryn. Caryn tells Jessica that Monica was her mother's sister. Caryn's mother informs Jessica that Monica had once wanted to save vampires by restoring their lives. This information reveals to Jessica the truth about her own birth, that she is the daughter of Jazlyn, a vampire who was pregnant before she was turned and gave birth after Monica restored her life.

Jessica goes to Aubrey in New Mayhem, but he is distracted when Dominique follows Jessica and attacks a human bound to a vampire. When Aubrey returns to the bar where he left Jessica, she is gone. Jessica had started home, but was attacked and badly beaten by Fala. Aubrey gets Caryn to heal Jessica, but her wounds are too bad. Caryn uses some of Aubrey's power to repair Jessica's wounds, but she still lacks too much blood to live. For this reason, Aubrey gives Jessica his blood, turning her into a vampire.

More summaries and resources for teaching or studying Demon in My View.

Demon in My View from BookRags. (c)2022 BookRags, Inc. All rights reserved.