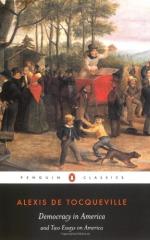 Alexis De Tocqueville
This Study Guide consists of approximately 42 pages of chapter summaries, quotes, character analysis, themes, and more - everything you need to sharpen your knowledge of Democracy in America.

This detailed literature summary also contains Topics for Discussion and a Free Quiz on Democracy in America by Alexis De Tocqueville.

"Democracy in America," by Alexis de Tocqueville, was written following a 9-month long exploratory voyage to the United States back in 1830. In the book, the French author analyzes the political and sociological aspects of the American democratic regime and contrasts his findings with the situation of the people living under the aristocratic regimes of France and England. Tocqueville spends a great deal of time praising the political and legal system of the United States as he tries to sell democracy to his contemporaries in Europe. He also uses his writing to warn of the possible downsides of democracy, such as the potential for extending the principle of equality and turn the democratic regime into a tyranny of the majority. "Democracy in America" remains to this day one of the most important books ever written about the democratic system and its consequences.

America's first Europeans sailed from England in the early 17th century to settle in Virginia in the southern part of the country and in New England in the north. The colonies of the South were populated by gold and silver diggers seeking fortune, while those of New England were mostly filled with Puritan refugees seeking to build a new world based on their rigid religious principles. Both colonies built their political and social systems independently from England and eliminated the rules of aristocracy. The principles of sovereignty of the people, equality of conditions, and liberty that grew out of the colonies of New England were used to establish modern democracy of America.

Following the American Revolution, the principles of democracy were written into laws. Governmental power was distributed between the federal level and the States, resulting in a country where government administration was highly centralized, but where the executive power was distributed among States, county and township governments. Local administrations are elected for limited terms and remain under the control of the people.

Peace is an essential component of freedom; since America is protected from potential invaders by two oceans, it has an enormous advantage over the countries of Europe in establishing and maintaining the freedom of the people. The political parties of America compete for power and rely on two free institutions: the free press and the freedom of association. The free press allows the people to stay informed about the ongoing debates and issues. The freedom of association allows minorities of all types to be heard and to exert pressure on the elected.

The Federal Constitution provides a system of checks and balances between the legislative and executive branches of government at every level. A potential danger exists for democracies to extend the principle of equality of conditions to the point where it turns into a despotic regime. However, the American laws and decentralized political power protect the country from turning democracy into a tyranny of the majority. The people of America submit to the laws of their country, because they recognize that more wisdom exists in the opinion of a number of men than in the opinion of a single one.

Democracy is responsible for a number of the differences between the manners and attitudes of the Americans and that of the typical European citizen. Religion plays an essential role in America, because it maintains the moral values necessary to prevent the social grid from falling apart. Religion and politics do not mix, each occupying its own sphere in the public domain. Americans are generally not interested in philosophy or theoretical science, because they are fundamentally materialists and pragmatic. For similar reasons, their literature is limited in scope and is mostly interested in the passions and complications of life that can be shared by a majority of readers.

The principle of equality of conditions is very important to the people of America; however, it also presents a clear danger to democracy as it can be used to take away individual freedom. The participation of the people in the political process is essential to the survival of American democracy, because it allows people to feel their dependence on each other. Materialism and individualism are side effects of the democratic system that helped create a new type of aristocracy based on wealth. However, democracy has positive effects on family relationships and on the mutual respects of the individuals.

More summaries and resources for teaching or studying Democracy in America.