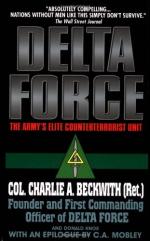 This is one of the most important locations in the book. A great deal of training and development goes on at this Army fort. It is mentioned in many chapters as the setting for the true story.

Charlie Beckwith wears one of these as his personal sidearm late in the book. He feels he is "that kind of man." He keeps it not only loaded, but "cocked and locked" in his holster.

This is mentioned once, when one man has to inform an imported officer that his Special Forces patch has been sown onto his uniform upside down. It may have simply been a foolish mistake but is referred to as his supreme ignorance when it comes to Special Operations.

In this book, this means the home of DELTA Force. The reason for this is straightforward. It had been the...