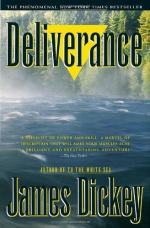 James Dickey
This Study Guide consists of approximately 27 pages of chapter summaries, quotes, character analysis, themes, and more - everything you need to sharpen your knowledge of Deliverance.

Deliverance is a novel by James Dickey, an American novelist and poet.

Lewis, Ed, Bobby, and Drew all decide to take a weekend canoe trip down a section of river in the North Georgia wilderness. Though none of them have any experience canoeing, and very little at all in the wilderness, each is bored with life in the city, and Lewis convinces them it is a perfect place for them to escape.

Ed is a graphics designer in his late forties who is unhappy at how quickly he has aged, and is Lewis’ closest friend in the entire group. He’s been with Lewis on similar trips before, though never this far into the wilderness. Though he has many second thoughts about going on the trip, he is very bored of his life in the city, and wants a chance to escape with Lewis and the others. He also wants to bring his bow along to go hunting, even though it is currently off-season. The four begin their journey in Oree, meeting numerous townsfolk who discourage the trip, but Lewis dismisses all of their concerns.

The first section of the river is simple enough, though all of them, being completely inexperienced in the water, have to learn quickly how to paddle in the rapids. They spend the first night camped out near the river, and Drew plays music for them. The next morning, Ed tries to shoot a deer while hunting but fails to hit it. Bobby is already very annoyed from the conditions in the river, as it is extremely hot and humid, and mosquitoes are everywhere. They continue uncomfortably down the river for some time until Ed signals Lewis on his canoe to pull over so they can rest.

When Ed and Bobby land, they are approached by two men, one holding a shotgun. They grow afraid and try to launch their canoes, but the man holding the gun forces them farther inland. There, Ed is tied up and Bobby is raped by the other man. Afterwards, they nearly assault Ed, but one of the men is killed from an arrow shot by Lewis. The second man escapes into the forest. The four of them decide to bury the body in the river so no one will ever know what happened. From there, they continue on down the river, desperately trying to make it to the town of Aintry as soon as possible.

Just as they enter another series of rapids, Drew is shot in the head and both canoes tip. Lewis’ leg is badly broken as he goes under, and when they all manage to float into milder waters, Ed realizes he will have to scale the cliffs to face the killer before he can shoot at them again the next morning. Ed does so, and finds the place where he believes the killer will shoot. A man arrives, falls into the trap Ed has set for him, and is shot, but Ed himself is also badly wounded in the encounter. What is more, neither he nor Bobby can be certain they have gotten the right man.

They make the rest of the way to Aintry, and tell the authorities they lost Drew in a canoeing accident, and focus on keeping their story straight to avoid any suspicions. As the weeks pass, a dam is built over the river and floods the place where Drew’s body and the body of the other man are hidden.