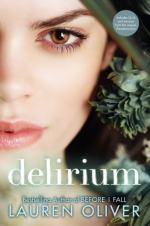 This detailed literature summary also contains Topics for Discussion and a Free Quiz on Delirium by Lauren Oliver.

In Delirium, seventeen-year-old Lena is waiting for her birthday, when she can have a procedure to stop her from falling in love; a condition that has been ruled a disease. Before she can get the procedure though, she falls in love with an Invalid, Alex, one of the rebels living unaltered in the Wilds outside civilized cities. Lena discovers that much of her life is a lie, including the supposed suicide of her mother, and runs off to the Wilds, but in the process, Alex sacrifices himself for her.

As the story begins, Lena waits anxiously for her procedure when all her pain will be removed. She lives in Portland, Maine, which like all U.S. cities is surrounded by guards and electric fences. No one is allowed in or out and no one is allowed to live in the Wilds outside the fences. There are rumored Invalids, who have not been "cured," living in the Wilds, but the government denies it. Lena plans to spend her last summer with her best friend Hana, before they are cured.

Lena goes for her evaluation, an oral exam through which the government will assign her a mate. She messes up, but the evaluation is interrupted when Invalids protest by letting loose cows in the labs. Lena sees a boy laughing in the observation area above her evaluation. Later, she meets him again. He is a security guard, who she thinks is cured, named Alex.

Meanwhile, Hana starts listening to underground music and going to illegal parties. Lena is frightened of breaking the rules. They start drifting apart, but not before Lena runs into Alex again at an illegal party. They agree to meet at the beach the next day, but when Alex tells Lena that he's not really cured and is an Invalid who grew up in the Wilds, she is frightened and runs away.

Lena tries to go back to being good and follow all the rules, not seeing Hana or Alex, but one night when Lena knows Hana is at an illegal party, the government has raids, looking for signs of illegal activity. Lena goes to warn Hana. She is too late, but Alex saves her from the raiding party, with their batons and attack dogs. Lena and Alex kiss. She is falling in love.

The summer goes by quickly, with Hana, Lena, and Alex hanging out together. Lena even visits the Wilds, but she is reluctant to run away there. Then Lena discovers that her mother, who Lena thought committed suicide, was locked away in the Crypts, dungeon-like prisons. She has recently escaped into the Wilds. Lena's whole world falls apart. She feels betrayed by her family and society and decides to run away with Alex. They make plans to escape, but Lena is discovered out past curfew at an abandoned house. She is tied up and her procedure is rescheduled to happen immediately. Alex comes to rescue her and they make a dash for the border. Alex sacrifices himself in order to allow Lena to escape.