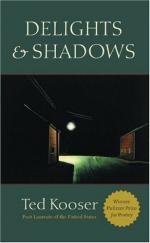 Introduction & Overview of Delights and Shadows

Ted Kooser
This Study Guide consists of approximately 37 pages of chapter summaries, quotes, character analysis, themes, and more - everything you need to sharpen your knowledge of Delights and Shadows.

Like much of Kooser's work, the poems in Delights & Shadows are written in a simple style with clear language and lucid yet challenging constructions. Kooser has lived much of his life in Iowa and Nebraska, and the poems reflect life as he knows it on the Great Plains. The poems in the collection touch on topics both bleak and celebratory, including impressions of strangers, family, memories, mortality, and history.

Throughout Delights & Shadows, Kooser repeatedly notes the unexpected in the smallest of objects, touches, and connections. He contrasts surprising images in his poems to create an emotional response in readers. In the Library Journal, reviewer Louis McKee noted, "That he often sees things we do not would be delight enough, but more amazing is exactly what he sees. Nothing escapes him; everything is illuminated." While some critics regard Delights & Shadows as the product of a regional writer, others believe that Kooser has transcended his background and reached a universal audience with this collection of poems.

More summaries and resources for teaching or studying Delights and Shadows.