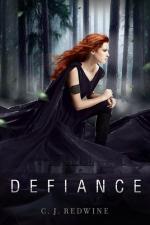 C. J. Redwine
This Study Guide consists of approximately 35 pages of chapter summaries, quotes, character analysis, themes, and more - everything you need to sharpen your knowledge of Defiance (Courier's Daughter).

Defiance by C.J. Redwine is the first in the Courier’s Daughter Trilogy. Defiance is a dystopian novel set in a world controlled by strange creatures released by greedy businessmen in a world unimaginable to the survivors. Rachel, the daughter of a courier, lives in one of several city-states that rose in the destruction of the world. The world's destruction was led by a military leader who, along with the members of his squad, managed to defeat the underworld creatures. Under the guise of keeping the civilians safe, Commander Jason Chase, has imposed massive restrictions on the people of Baalboden. Women are forced to have a Protector. After the disappearance of her father, Rachel is forced to accept as her Protector Logan McEntire, her father’s apprentice. This causes for Rachel a storm of emotions, particularly since she once confessed her love to Logan and was rebuffed, but Logan soon becomes her only ally as Rachel becomes determined to escape Baalboden and find her missing father.

Rachel Adams’ father, a courier in the city-state of Baalboden, has not returned from his last mission to the nearby city-state of Rowansmark. At the sixty day mark, Commander Jason Chase, leader of Baalboden, declares Jared Adams dead. At the reading of his will, Rachel learns that she has been given Logan McEntire as her Protector instead of the anticipated Oliver, a family friend. Rachel is angry, not only because she does not believe her dad is dead, but because she does not want to be stuck with a Protector so close to her own age, especially a young man she once declared her love to.

Logan, who figured out Rachel’s plan too late to stop her, is also captured by the Commander’s guards. When Rachel makes it clear to the Commander that she knows where the Rowansmark package is, but that she must go herself to recover it, Logan insists on going with her. After some threats, the Commander agrees to Logan’s demands.

After their confrontation with the Commander, Logan admits to Rachel he has been working on a plan to go search for Jared all along. Together they prepare for their trip into the Wasteland, trying to plan for every possibility, including options for escaping the guards the Commander plans to send with them. As time for their departure draws near, Rachel begins to worry about their friend, Oliver. Logan tells Oliver his plan for searching for Jared and asks him to escape the city the day before Logan and Rachel are to leave and wait for them. Oliver agrees.

The following day, Rachel is with a friend planning for the friend’s Claiming ceremony. The Commander has Rachel picked up in a wagon where there is a person wrapped in a sack. As the Commander speaks to Rachel about trying to outsmart him, he stabs the person in the sack. Rachel is mortified to discover the person is Oliver. After Oliver is dead and his body taken away, the Commander tells her that he wants her to participate in the Claiming ceremony, but he wants her to ask to be a ward of the state instead of being claimed.

Rachel is in a state of shock after Oliver’s death, but is eventually able to tell Logan what happened. They make a plan on how to deal with the Claiming ceremony, but when it comes time for Rachel to face down the Commander and refuse to choose to become a ward of the state, she buckles out of fear for Logan. Logan becomes enraged when the Commander hits Rachel for insubordination and a sword fight ensues. Rachel manages to calm the situation by threatening to kill herself, thereby denying the Commander the package only she knows where to find. Rachel agrees to get the package as long as Logan remains alive. The Commander agrees, but places Logan in his dungeon where he is badly beaten and left to starve.

Rachel travels with one of the Commander’s couriers, Melkin, whom, it turns out, has been forced to travel with Rachel after his pregnant wife is imprisoned. Rachel and Melkin forge an uneasy alliance that comes apart when Rachel receives the package and Melkin tries to take it from her. Rachel kills Melkin, but is immediately overwhelmed with regret when she realizes he was only trying to disarm her, not kill her.

Logan manages to escape the dungeon and catches up with Rachel just in time to save her from a Rowansmark tracker. Together they forge a plan to kill the Commander. They plan to use the object from the package the Commander wanted, a flute that controls the underground monsters that destroyed the world fifty years ago. However, the creature does not respond to their controls, but instead seems to be responding to someone else. The creature begins to destroy Baalboden, leaving Logan and Rachel scrambling to save as many citizens as they can.