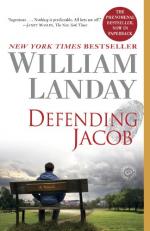 In Chapter 21, “Beware the Fury of a Patient Man,” Barber continues to focus on Patz, becoming more convinced he is the murderer the more he watches him. He trails Patz, hoping the man will make a mistake. One afternoon, Barber follows Patz in traffic, bumping his car from behind twice. When Patz gets out of his car, Barber confronts him, accusing him of the murder of Ben Rifkin. Patz claims not to have had any part in Ben’s murder even though Barber continues to accuse him.

The story switches forward to Barber’s questioning by Logiudice. Barber accuses Logiudice of burying evidence by not brining the jury’s attention to the fact that Patz was a suspect. Barber challenges Logiudice to tell the jury how he knew Patz, but Logiudice will not humor him and suggests that they move along.