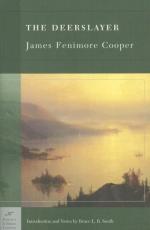 The Deerslayer Summary & Study Guide includes comprehensive information and analysis to help you understand the book. This study guide contains the following sections:

This detailed literature summary also contains Related Titles and a Free Quiz on The Deerslayer by James Fenimore Cooper.

The Deerslayer is the opening novel in a series about frontiersman Nathaniel Bumppo, nicknamed Deerslayer. The novel follows Deerslayer as he lives alongside his Native American friends and develops into a legendary figure during the decades leading up to the American Revolution. His rugged honesty sets him apart from the other settlers and his strongest relationships remain with the Native American tribes of his youth, particularly a young chief known as Chingachgook. The Deerslayer chronicles the earliest exploits of this pair as they establish a name for themselves in the northern frontiers of colonial New York.

The novel opens with the French and Indian war. The French and British colonial governments are fighting for territory in North America, with Native American tribes taking sides. The principal characters are aligned with the English side, including the Delaware tribe. Their enemies, sometimes known as the Iroquois, the Huron, or the Canadas, are aligned with the French. A small group of these French allies have been delayed in their journey to the French territory when they cross paths with Deerslayer and his friends.

Deerslayer, a young and inexperienced frontiersman who has spent a great part of his life living with the Mohican and Delaware tribes, is meeting his friend Chingachgook in order to rescue Chingachgook's bride, Wah-ta-Wah, who has been kidnapped by Briarthorn of the Iroquois. On his way there, Deerslayer meets Hurry Harry March, who is going to propose to Judith Hutter, who lives with her family on an isolated lake. The two of them meet up with the Hutter family just in time to rescue the family from the attacking Iroquois tribe.

The Hutter family consists of Tom Hutter, a fugitive pirate, and his two daughters, Judith, a local beauty with a bad reputation, and Hetty, a simple-minded girl with strong religious feelings. Hutter and Harry devise a plan to sneak into the Iroquois tribe and scalp all the members in order to collect a reward from the colonial government. Despite warnings from Deerslayer and Hetty, they go out on this foolish and greedy mission and are captured. Hetty goes to preach to the tribe to release her father on Biblical grounds. They do not hurt her out of respect for her innocent mental condition. Eventually, Deerslayer negotiates for the release of the two prisoners in exchange for trinkets he finds in the Hutter home.

Deerslayer and Chingachgook set out to rescue Wah-ta-Wah. In order to help Chingachgook and Wah-ta-Wah escape, Deerslayer is taken prisoner. He is ordered to marry one of the tribe or die. He is given a furlough, or twenty-four hours freedom, to decide. His return from the furlough proves his honor, but his refusal to marry the Native American woman insults them. They torture him for some time. They are about to torture him with fire when the local garrison arrives and massacres the tribe. Hetty Hutter is accidentally killed in the shooting, but all the other principal characters survive.

Judith Hutter tries to convince Deerslayer to marry her, but he refuses because of the rumors about her past. Instead he returns to the Delaware tribe with Chingachgook and Wah-ta-Wah. Deerslayer and Chingachgook become legend in the area, but the others all disappear into history.

The Deerslayer from BookRags. (c)2022 BookRags, Inc. All rights reserved.