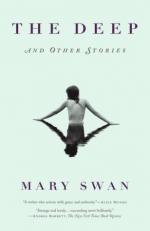 They never have much of a relationship with their mother whose health is fragile. She is always removed from them, resting up in her room or on the verandah, watching them from a distance. She dies while the twins are very young, depriving them of an important relationship in their formative years.

The ruined relationship between the twins and their older brothers is a direct result of the twins' birth and, later, their mother's death. James and Marcus resent and hate the twins because...

The Deep from BookRags. (c)2022 BookRags, Inc. All rights reserved.