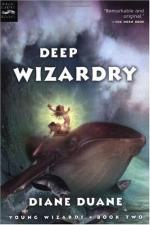 Diane Duane
This Study Guide consists of approximately 50 pages of chapter summaries, quotes, character analysis, themes, and more - everything you need to sharpen your knowledge of Deep Wizardry.

Deep Wizardry by Diane Duane is the second of a series of stories that follows two young wizards as they discover their abilities and work toward the betterment of all mankind. The Earth and the preservation of all the species on it is the primary goal of wizards worldwide, and as young wizards are at their most powerful in their youth, Nita and Kit are called upon to take on assignments that are perilous and have consequences that ripple throughout space and time.

In this episode, Nita and her family are on vacation on the Eastern Coast, taking Kit along with them. While at first it appears that they are simply on a break, Nita meets a dolphin while swimming who tells her about a whale in distress. Having been attacked by a whaler, S'reee is badly injured, beaching herself to keep the sharks in the area at bay, but the tide is coming in and the situation is getting desperate. Nita and Kit go to her, healing her and in the process, hear a story that is frightening and desperate. The Lone Power (responsible for creating the concept of death and then expelled by the other powers as a result) is causing upheaval deep down in the ocean. His efforts are the cause of tremors, underwater lava spumes and left unchecked, a situation similar to the one that destroyed Atlantis is on the horizon. S'reee explains that to secure the Lone Power once more, the Song of Twelve must be sung, but having recently lost her mentor, S'reee is struggling to take the steps necessary to orchestrate the event. Nita offers to help by singing one of the parts required, as only wizards may do so, and commits herself to being the 'Silent One', believing that it will be the easiest part to perform.

She soon discovers that her assessment was way off. In fact, the wizard who performs the part of the 'Silent One' is required to willingly Sacrifice themselves at the end to bind the Lone Power. Unfortunately, once Nita agrees to her part, there is no way that she can get out of it. The rehearsals, and preliminaries are so extensive and time consuming that Nita finds herself having to reveal the truth of her wizard status to her parents for the first time. Incredulous at first, they are only convinced when Nita and Kit create the spell together that has them all standing on the moon near Apollo 16. Then, when Nita admits the assignment is dangerous, they forbid her to participate. Rather than take the simple exit provided by her parents, she and Kit gently remind them that as wizards, they would be hard pressed to stop them. It is the first time that Nita has ever directly defied her parents. Nita talks to Senior Wizard and adviser, Carl, still seeking a way to avoid the end Sacrifice, who tells her only that there is little he can do. Her part must be played, and the more willingly the Sacrifice is given, the more powerful it will be. In an explosive turn of events, Master Shark Ed'Rashtekaresket takes her place, giving himself up for Sacrifice. His willing substitution is accepted and the Eastern Coast is saved from the fate of Atlantis. Nita's parents await them on the beach, tired but successful. The next day they return the whalesark to S'reee and discover that 'Ed' is now in Timeheart, his soul forever alive in this place where spirits who are loved go after death. Recognizing him and sensing his peace and contentment, Nita and Kit no longer regret his passing and instead, celebrate his gift to them all. They are ready for their next assignment.

More summaries and resources for teaching or studying Deep Wizardry.