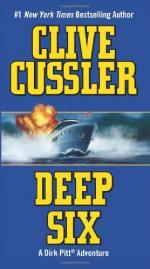 Clive Cussler
This Study Guide consists of approximately 44 pages of chapter summaries, quotes, character analysis, themes, and more - everything you need to sharpen your knowledge of Deep Six.

This detailed literature summary also contains Topics for Discussion and a Free Quiz on Deep Six by Clive Cussler.

Deep Six is a Dirk Pitt novel by Clive Cussler. Dirk Pitt investigates the Pilottown, a ship found on Augustine Island in Alaska with a nerve agent in her cargo hold. During what seems like a routine investigation, an EPA agent is killed. Pitt is outraged by this needless death and becomes determined to find the source of the stolen nerve agent in order to get justice for the EPA agent's death. Pitt is a bulldog, determined even when his boss needs him to focus on other investigations. Deep Six is a novel of international intrigue, one that will keep Cussler fans, as well as new readers, on the edge of their seats.

Dirk Pitt is exploring a Civil War wreck when EPA agent Julie Mendoza recruits him to help find a shipwreck that is suspected of being the source of a nerve agent creating havoc off the coast of Alaska. Pitt finds the ship quickly. During their investigation, an earthquake causes Mendoza to injure her leg, tearing her suit in such a way that she is exposed to the nerve agent and killed. Although he only knew her for a short time, Pitt is outraged at this death and determined to find out who is responsible for the stolen nerve agent and the wrecked boat.

Pitt begins to track the Pilottown, the ship in Alaska, and soon learns that it was once a cargo ship by the name of San Marino. This discovery becomes public and a private investigator from California learns of it. The investigator, Sal Casio, travels to Washington, D.C. to speak to Pitt about the San Marino. It turns out that when the San Marino disappeared more than twenty years before, Casio's daughter was onboard. Pitt agrees to work with Casio in bringing to justice the people he believes are responsible for his daughter's death.

Pitt quickly begins to put together the pieces of the Pilottown mystery, learning how ships are often stolen and refitted, as well as renamed, in order to be used in illegal shipping practices. At the same time, Pitt is pulled off the investigation in order to find the Presidential yacht, the Eagle, that Secret Service agents believe has been sunk somewhere in the Potomac. Pitt again finds the yacht quickly, finding all the crew members murdered. Pitt is not curious about the Eagle, but suspects that someone important has been murdered. In fact, it turns out that the President of the United States, the Vice President, and two Congressmen have been kidnapped.

The President is being held in a secret lab and is undergoing brainwashing techniques. During the procedure, a KGB agent sneaks the two Congressmen out of the lab. These men are taken secretly onboard a Russian cruise ship. Ironically, Congresswoman Loren Smith is a passenger on this same cruise ship and witnesses the arrival of her two colleagues. Smith begins making phone calls, attempting to learn what is going on. During one of these calls, Smith is cut off and taken into custody. When Pitt learns about this, he quickly boards the cruise ship and rescues Smith. However, before Pitt, Smith, and her colleagues can escape the boat, it is sabotaged and begins to sink. Pitt and Smith are separated during the chaos of abandoning ship and Smith is once again kidnapped by Lee Tong, the mastermind behind the President's kidnapping.

At the same time, the President has returned to the White House, claiming to have been on a secret trip to visit the Russian President. The President of the United States begins making questionable policies and disbands Congress to prevent them from interfering. Congress begins planning to impeach the President while those close to the President realize what has happened and scheme to stop Russian control over him. The impeachment process begins, giving the government only a short time to find the Vice President in order to keep the Speaker of the House from becoming President.

Pitt goes after Smith, discovering she is most likely onboard a barge in the middle of the Mississippi River. When Pitt finds the barge, it nearly escapes his pursuit, but Pitt manages to board the barge thanks to the help of a riverboat and a squad of Civil War re-enactors. Pitt saves Smith and also finds the Vice President, saving him as well. The Vice President is returned to Washington in time to be sworn in as President.

More summaries and resources for teaching or studying Deep Six.