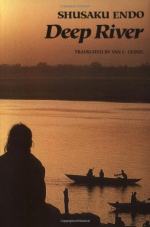 The River Ganges that flows through India is sacred to the Hindus, who travel to the Ganges when they are dying in hopes of being cremated and having their ashes scattered in the sacred river. The characters in the novel converge at the River Ganges, bringing their own sorrows to the sacred place.

Hospitals are important settings in the novel. Keiko, Isobe's wife, spends her last four months of life in a hospital, and Numada spends months in a hospital suffering from tuberculosis. Hospitals bring the characters close to death.

While Keiko is in the hospital, she converses with the ginko tree outside her window. She believes, based on these conversations, that she will be reincarnated.

The Highway of Death

The Highway of Death is the World War II Japanese soldiers' name for the route that Kiguchi travels in Burma, as he...