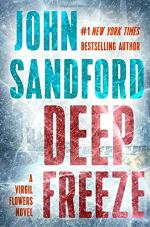 John Sandford
This Study Guide consists of approximately 59 pages of chapter summaries, quotes, character analysis, themes, and more - everything you need to sharpen your knowledge of Deep Freeze.

David Birkmann, known locally as Bug Boy, has always loved the woman he went to high school with. So, when the woman, Gina Hemming, invites him to her house as a member of a committee to plan a high school reunion, he plans to return after the meeting to profess his love to her. That part of the plan works. However, the situation gets complicated when she lets him know that she does not share his feelings by humiliating and hitting him. He, in turn, accidentally kills her by hitting her with a full bottle of champagne. Instead of reporting the incident, he moves her body and tries to make it look as if she fell down the stairs.

Soon afterwards, a local fisherman finds Gina’s body in the river. Virgil Flower’s boss calls a vacationing Virgil in to investigate the case as he has previous experience solving cases in the town. Virgil’s investigation uncovers that Gina participated in secret bondage and dominance (B and D) activities. This information leads Virgil to Fred Fitzgerald, the male partner in the activities. Fred was also at Gina’s house on the night of the meeting. Even though she was already dead when he got there, fear that the police would arrest him for Gina’s murder causes him to take her body to the river. Thus, the investigation to find the real killer continues.

At the same time, Virgil also has orders to help a private investigator from Los Angeles, Margaret Griffin, shut down the manufacturing of altered Barbie Dolls. An intersection of the two cases occurs when the mastermind behind the manufacturing of the Barbie Dolls leads Virgil to a witness who saw one of David’s trucks at Gina’s house at the time of her death and ultimately allows Virgil to realize that she also saw David there wearing his yellow hat even though the witness thinks she saw a man with blond hair.

David has already tried to eliminate evidence that he was still present after everyone else left the meeting by killing another member of the reunion committee, Margot Moore, who knows that he did not leave the meeting when he says he did. He is careless when he kills her, however, as he uses a gun that only he has because it is made for exterminators and he has a bug exterminating business. Virgil uses the evidence he receives about the gun in addition to figuring out that the blond haired man was really David in his yellow hat, to determine that David is the killer.

Once he solves the case and obtains additional evidence which proves his theory is correct, he takes the local deputy with him to arrest David. David, who realizes that he is going to be caught soon, is contemplating suicide. However, when Virgil and the deputy arrive, he confesses to the murders and plans to kill both Virgil and the deputy. When it looks as if he is about to shoot, Virgil, who usually does not carry a gun, shoots him first.

With that case solved and the manufacturing of the illegal Barbie Dolls shut down, Virgil returns home and indicates that his is ready to move forward in his relationship with his girlfriend by attempting to have a child.

More summaries and resources for teaching or studying Deep Freeze.