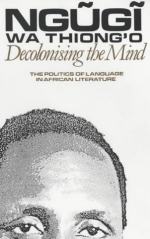 Related Topics
A Grain of Wheat
Ngg wa Thiong'o
Petals of Blood
The Martyr
The River Between
Weep Not, Child
Wizard of the Crow
Minutes of Glory
I Will Marry When I Want
A Meeting in the Dark
The Upright Revolution

zThe following version of this book was used to create this study guide: Ngũgĩ, wa Thiong’o. Decolonizing the Mind. Heinemann, 1986. Reprinted in 2011.

In this collection of four essays, author Ngũgĩ wa Thiong’o addresses what is commonly called the “language question”: whether Africans should study and write in European languages instead of their native tongues. In particular, this collection of essays addresses why the author has chosen to no longer write in English and instead in Gĩkũyũ and Swahili alone.

In the Preface, the author describes the genesis of this work and explains that he does not intend to criticize writers who use English, French or Portuguese. His criticisms are instead directed towards the neocolonial and imperial theft of African culture and talent. In a section titled, “A Statement,” Ngũgĩ announces his final “farewell to English” (xiv). In the Introduction, Ngũgĩ criticizes the tendency to view African history in terms of unrelenting tribal conflict. Instead, Ngũgĩ interprets African history as an interaction between imperialism and resistance. On the one side are multinational corporations and local elites, on the other the working classes and progressive intellectuals.

In Chapter 1, “The Language of African Literature,” Ngũgĩ explains how choice of language became a matter of contention in Africa. He notes that while he and other writers were seeking some original form of African novel, they continued to use imperially imposed European languages. He argues that it is important to return to African languages because language is the carrier of a culture; forbidden from writing in their original languages, African schoolchildren and intellectuals fall out of harmony with their world and environment. However, the peasantry remain connected to their original languages. By reconnecting with the revolutionary tradition of organized African peasantry and workers, African writers can discover new, more democratic and subversive forms of literature.

Chapter 2, “The Language of African Theatre,” opens with Ngũgĩ’s decision in 1976 to get involved with a cultural center in a rural village called Kamĩrĩĩthũ. He decides to use drama, which he considers integral to the daily and seasonal life of the community, in order to critique imperialism. Ngũgĩ decides to write his next play, Ngaahika Ndeenda (I will marry when I want), about a poor peasant family in Gĩkũyũ. Auditions and rehearsals are open to everyone, and the script is a collaborative effort. In response to the play’s success, the Kenyan authorities burn down the village center.

In Chapter 3, “The Language of African Fiction,” the author focuses on describing his experience writing his first novel in Gĩkũyũ, Caataani Mutharabaini (Devil on the Cross) in order to address broader issues surrounding the origins and development of the African novel. After the play is produced, Ngũgĩ is thrown in jail, where he proceeds to write the novel on scraps of toilet paper. At first he struggles with the Gĩkũyũ. He also struggles with finding the right narrative style for his audience, which has never read novels before and may struggle with the nonlinear, experimental style of his later works. However, he ultimately settles upon a simple narrative style, and the novel is an immediate success. Out of this experience, Ngũgĩ decides that the African fiction writer, more so than any translator, publisher or reader, bears the responsibility for finding new forms of the African novel.

In Chapter 4, “The Quest for Relevance,” Ngũgĩ returns to some of the major themes and lessons in the “language question” instead of making the expected leap to African poetry. Underlying the politics of African languages, Ngũgĩ argues, is the search for “a liberating perspective within which to see ourselves clearly in relationship to ourselves and to other selves in the universe” (87). Ngũgĩ calls this search the “quest for relevance” (87). Because English studies in Africa focused so heavily on canonical British authors like Shakespeare and Milton, African students were forced to see themselves from outside themselves. Therefore, he and others at the university attempted to restore harmony and perspective to students by placing the primary emphasis on African languages. Ngũgĩ describes three possible bases from which to establish relevance and perspective: the national democratic base, the philosophical and the class base. Eventually, Ngũgĩ hopes that the promotion of African languages will lead to national, democratic and human liberation through struggle.