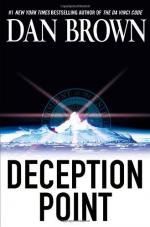 Dan Brown
This Study Guide consists of approximately 67 pages of chapter summaries, quotes, character analysis, themes, and more - everything you need to sharpen your knowledge of Deception Point.

This detailed literature summary also contains Topics for Discussion and a Free Quiz on Deception Point by Dan Brown.

Deception Point is a mystery and suspense thriller that combines in-depth knowledge of classified intelligence with high-tech weaponry and presidential politics in a very fast-paced, suspenseful novel. There are many plot twists and surprises throughout the story, and a wealth of interesting characters.

On the Milne Ice Shelf in the far north, a meteorite has been discovered under the ice that contains fossils of large bugs; proof of life on other planets. NASA is there, along with four civilian scientists to verify that the meteorite and its fossils are authentic. Rachel Sexton, a highly-competent, intelligence analyst with the National Reconnaissance Office, is sent there by the President of the United States to also confirm what has been found. Rachel is the daughter of Presidential candidate Senator Sedgewick Sexton, who is running against the current President and is ahead in the polls.

The President goes live with a press conference to announce to the world NASA's discovery of proof of extra-terrestrial life. Rachel, after first verifying that the meteorite is real, begins to see some strange contradictions, and along with Michael Tolland, an oceanographer, and some others, embarks on a terrifying quest to find out the truth behind the meteorite. Along the way, they are attacked by assassins and barely escape with their lives from some terrifying situations.

Meanwhile, the race for the presidential election hangs in the balance, as a NASA victory will cement the current President's place in the White House, but evidence of a NASA conspiracy will ensure that Sexton wins the election. The book climaxes with Rachel and Michael finding all the evidence they need to prove that the meteorite is fake, while simultaneously escaping from a team of deadly assassins, and the mastermind of the conspiracy, William Pickering, Rachel's boss and the director of her intelligence agency.

The White House tells the world that the meteorite was planted; Sexton is betrayed by his closest adviser, disgraced by a sex scandal, and threatened with blackmail regarding illegal campaign practices. Michael and Rachel get together in the end, and the media speculates that the current President will keep his office for another term.

More summaries and resources for teaching or studying Deception Point.