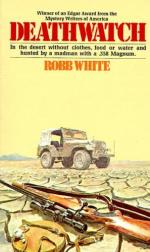 Robb White
This Study Guide consists of approximately 20 pages of chapter summaries, quotes, character analysis, themes, and more - everything you need to sharpen your knowledge of Deathwatch.

Deathwatch is the award-winning novel by Robb White. Ben is a young college student who agrees to act as a guide for a rich executive who has been given the opportunity to hunt bighorn sheep. However, when the executive accidentally shoots and kills an unknown prospector, he turns on Ben in fear that Ben will testify against him in court. Ben finds himself stripped naked and forced to face the elements of the desert while a madman outthinks him every time he makes an attempt to save himself. Deathwatch is a novel filled with suspense that will leave the reader on the edge of their seat until the final chapter.

Ben is quietly unhappy to be spending the next few days with Madec, an executive who hopes to bag a perfect bighorn sheep. Ben would never have chosen Madec as a hunting partner, but he needs money to continue his college education and Madec is paying him enough to cover at least one semester, hopefully two. Three days into the trip, Ben takes Madec into the mountains where they find a herd of sheep. Madec takes aim, but Ben warns him to wait until he sees the horns. Madec shoots anyway. When Madec goes into the mountain to check on his kill, he makes Ben promise that if the sheep is not perfect he will allow him to continue hunting. Ben agrees, thinking of what he could do with the promised money, but promising himself he will not take Madec where he will find more sheep.

Madec checks out his kill and then comes running back, assuring Ben that he missed. Ben, who has seen blood on the rocks, does not believe Madec and goes in search of the animal anyway. Instead of an animal, Ben discovers that Madec has shot an old prospector. The old man is not someone Ben recognizes. Madec begs Ben to bury the body and forget about it, but Ben insists they must take the body back to the sheriff and explain what happened. While Ben is gone gathering the necessary tools to take the old man out of the mountains, he hears his rifle fire twice. When he returns, Ben discovers that Madec has shot the old man twice with Ben's rifle.

Madec tells Ben that he cannot risk going to jail and if Ben insists on going back to town he will tell the sheriff that Ben killed the old man. Ben argues. Madec then forces Ben at gunpoint to strip naked. Madec wants to make it appear that Ben went insane from dehydration and heat stroke. Ben has no choice. Ben strips and runs off at gunpoint. Ben then double backs and waits for Madec to leave the area, hoping to take the boots and clothing from the old prospector. However, Madec is once again one step ahead of Ben and has stripped the dead man of all his clothing. Ben then goes in search of the prospector's camp only to find that Madec has also found it and stripped it of all usable items.

Ben finds water the next day, but Madec fires the rifle at him, forcing him away from the water. As Ben sleeps, Madec comes up the mountain and destroys the water hole. This leaves Ben desperate and only hours from death. Ben decides to make his way to a butte where he suspects there might be water caught in a tunnel-like fissure. Ben walks all night and climbs through the morning, finally making it up the butte and finding water. Ben spends a day recovering and eating small birds who come to drink the water. Then Ben realizes that Madec has found him and is attempting to climb the butte.

Ben slips off the butte in the middle of the night and hides not far from Madec's camp. In the morning, Ben creates a distraction and forces Madec to come running back to camp. As he does, Ben fires on Madec with a slingshot he found in the prospector's camp. Ben then ties up Madec and goes back to town to the sheriff's office. Unfortunately, the sheriff's deputy believes Madec's story over Ben's. Ben faces murder charges and aggravated assault charges until the new doctor in town testifies that there is no way Ben killed the prospector with his smaller gun or shot Madec with his rifle. Ben is finally free of Madec and his lies.

More summaries and resources for teaching or studying Deathwatch.