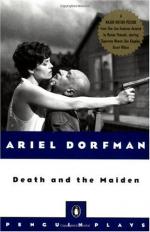 Ariel Dorfman
This Study Guide consists of approximately 52 pages of chapter summaries, quotes, character analysis, themes, and more - everything you need to sharpen your knowledge of Death and the Maiden.

It is now getting on toward evening. Gerardo and Paulina are out on the terrace with the tape recorder. Roberto is still tied up in the living room. Gerardo is trying to get Paulina to tell him something she had started to tell him years before. The interruption then was a woman who Gerardo had been sleeping with while Paulina was imprisoned. The woman had claimed to be able to help Gerardo find Paulina.

Paulina had forgiven him this, though, and they had made a new start. However, she still wants to know how many times Gerardo slept with the other woman. He finally admits to doing so a total of 5 times. He asks if she truly wants them to torture each other in this way. Does she want him to leave?

Paulina wants him to stay. She wants them to...

Death and the Maiden from Gale. ©2005-2006 Thomson Gale, a part of the Thomson Corporation. All rights reserved.