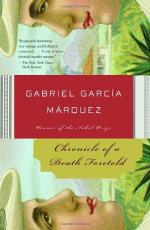 Chronicle of a Death Foretold Summary & Study Guide includes comprehensive information and analysis to help you understand the book. This study guide contains the following sections:

This detailed literature summary also contains Topics for Discussion on Chronicle of a Death Foretold by Gabriel García Márquez.

The story, A Chronicle of Death Foretold, is an in-depth look at the final moments leading up to the murder of Santiago Nasar. The narrator recalls from his memory, and the memories of others that he interviews, Santiago Nasar’s final day of life and his murder by his friends Pablo and Pedro Vicario.

From the beginning, the narrator states Santiago’s death was foretold and it was a series of inexplicable coincidences that lead to his murder. The narrator combs over every detail of Santiago’s last day of life, trying to make sense of the events that occurred and the life that was taken from his friend.

The day before his death, Santiago and his friends are celebrating the marriage of Angela Vicario to a newcomer to the town named Bayardo San Román. Angela is from a poor family and when they meet Bayardo and learn of his intentions to marry Angela, they pressure her into the marriage against her wishes. In a last ditch effort to avoid marrying Bayardo, Angela confesses to her mother she is not a virgin. The women of the family convince Angela most women her age are not virgins and assures her there are surefire ways to deceive her new husband into believing she is.

On their wedding night, Angela sets off with Bayardo to their new home with all of the supplies her mother has given her to “fake” her virginity. However, being an honest person, Angela decides to tell Bayardo the truth. Upon learning his bride is not a virgin, Bayardo returns her to her family’s house in shame.

When pressured by her brothers about the individual who claimed her virginity, Angela gives them the name of Santiago Nasar. The Vicario twins know what they must do to restore honor to their sister and their family.

That morning, before dawn, Pablo and Pedro Vicario set out on their mission to kill Santiago Nasar. However, they do not hide their intentions. Everywhere they go, the Vicario twins tell anyone who will listen of their plans to murder Santiago. Many people believe the twins did this hoping that someone would step in to stop them; their desire to murder Santiago seemed lacking in fervor.

When no one acts to stop adequately them, the Vicarios are left with no other option but to kill Santiago.

Early in the morning, the day after Angela and Bayardo’s wedding, Pedro and Pablo Vicario chase Santiago Nasar down and stab him to death in front of his house.

So many things seemed to work out incorrectly for Santiago—if only one of the many odd coincidences would not have happened, then Santiago might have been spared.

In the end, everything seems to be working against Santiago, who ends up dead for an act that many consider pure fabrication.

Chronicle of a Death Foretold from BookRags. (c)2022 BookRags, Inc. All rights reserved.