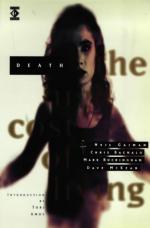 Neil Gaiman
This Study Guide consists of approximately 26 pages of chapter summaries, quotes, character analysis, themes, and more - everything you need to sharpen your knowledge of Death, the High Cost of Living.

This detailed literature summary also contains Topics for Discussion and a Free Quiz on Death, the High Cost of Living by Neil Gaiman.

Death: The High Cost of Living is a short, graphic novel that follows the character of Sexton Furnival, a sixteen-year-old boy who has decided to kill himself. After making this decision, Sexton meets Didi, a girl near his age, who claims to be Death.

Sexton Furnival has decided to kill himself, as he can find nothing in life worth living for. The boy does not seem angry about anything, more resigned to the fact that there is nothing in life that is worth effort. The only child of divorced parents Sylvia and Steve, Sexton calmly writes his goodbye until his mother sends him out so that she can clean the apartment.

Sexton heads to the city dump where he thinks quietly until he slips and is caught under a refrigerator. A girl his age helps him get free, then offers to let him come to her apartment to clean up. Introducing herself as Didi, the girl takes Sexton to her apartment, introducing him to Mrs. Robbins, the woman who operates the shop on the first floor. Mrs. Robbins tells Sexton that Didi has suffered a horrible tragedy recently, when her entire family was run down by an out-of-control car. Sexton can't get over the fact that a girl who has suffered such a tragedy so recently can seem so happy.

Sexton tells Didi that he is sorry about her family, and that they look nice in the photo she has in the apartment. Didi responds oddly, telling Sexton that the family in the photo only exists in order to make her time on earth more comfortable. Didi explains to Sexton that she is Death. Sexton reacts in anger and leaves, only to meet Mad Hettie, a strange old woman who threatens Sexton and forces him to take her to Didi. Mad Hettie wants Didi to find her heart. The old woman claims that she hid her heart so that Didi would not be able to find it, but now, after living 250 years, she is ready.

Sexton decides to stay with Didi and see what the day brings. Sexton is sullen and moody, often speaking sarcastically about the simple joys that Didi seems to find in everything. The two attend a party, where Sexton runs into a former employee of his mother's. Hazel is there in support of her lover, Foxglove, who is performing for the first time that night. A casual conversation with a man next to him sets Fox's career in motion, though Sexton is unaware of it at the time. Because he is the son of a famous entertainment lawyer in California, Sexton's opinion of the performer carries some weight.

Sexton also meets a young girl who shares the story of a 'friend' when he casually reveals that he is planning on killing himself. The girl tells the tale of her friend, who was sexually abused by her father and his friends until she could take it no longer and attempted suicide only to wake up in the hospital happy to be alive. Sexton wonders what happened to the girl and is told that she moved to the city. Sexton does not appear to notice that the girl is wearing long gloves, leading one to believe that the story is about her. Despite his apparent lack of care, Sexton takes notice. Life is not that bad just because it is boring.

At the party, Didi meets Theo, a strange young man that attends the same school as Sexton. Though Sexton tries to warn her away from Theo, Didi goes with him anyway, intent on having a good time while she is living. Arriving at an abandoned building, Didi and Sexton are lead into the basement where they come face to face with a blind man who calls himself an Eremite, or religious hermit. The blind man has been acting as a type of teacher to Theo, and has instructed the boy to bring Didi to him. Theo removes the Ankh that Didi wears and when he has second thoughts about handing it over, the blind man strikes him, cracking his skull against the wall. He then leaves, telling Sexton and Didi that he will be back.

While locked in the basement, Didi tells Sexton that once a year Death takes human form, to better understand humans and life, as well as mortality. Sexton still does not believe that Didi is Death, but her casual acceptance of the death of Theo sways him a bit.

The two are rescued by Mad Hettie and Mrs. Robbins after Hettie sees them being held captive in the tea leaves she brewed. The young couple continue their adventure, with Didi enjoying life and searching for Mad Hettie's heart.

Sexton and Didi spend a nice morning together, once again frustrating the Eremite who cannot understand why no one recognizes Death, and angry that despite having her Ankh, he has no power over Didi. The young couple head to Central Park where Didi tells Sexton that she had a nice day, then falls backwards into the fountain.

Sexton at first thinks that Didi is just being her eccentric self until the Eremite arrives, angry that Didi has escaped him again.

Sexton learns from Mrs. Robbins that Didi was born with a heart defect and has been dying her entire life. He explains to Billy that despite his earlier wish to die, he is now willing to wait for the chance to see Didi again, and is happy that Death is not just blackness, but something or someone. Leaving the nesting doll with Billy, Sexton goes out to enjoy the day.

Mad Hettie arrives and finds her heart in the nesting doll. Having missed the chance for Death again, she leaves, trying to decide where to hide her heart again. Didi speaks with unknown and unseen person, telling them that her one day on earth was worth it, having met some nice people. Didi is clearly thinking of Sexton, the boy she saved from an early death.

More summaries and resources for teaching or studying Death, the High Cost of Living.