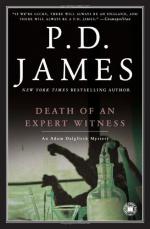 P. D. James
This Study Guide consists of approximately 62 pages of chapter summaries, quotes, character analysis, themes, and more - everything you need to sharpen your knowledge of Death of an Expert Witness.

Death of an Expert Witness Summary & Study Guide includes comprehensive information and analysis to help you understand the book. This study guide contains the following sections:

This detailed literature summary also contains Related Titles and a Free Quiz on Death of an Expert Witness by P. D. James.

Death of an Expert Witness by P. D. James takes place in Chevisham, England, sometime in the late twentieth century. Dr. Edwin Lorrimer (the "expert witness") is murdered in his workspace at Hoggatt's Lab, a forensic crime lab. Further on in the book, a middle-aged woman, Stella Mawson, is also murdered by the same man, Dr. Kerrison. Commander Adam Dalgliesh, a Scotland Yard Detective, using the few clues available, must eliminate numerous persons with the motive to kill Lorrimer to finally bag his man.

Scotland Yard is called in on the murder because of the conflict of interest. Because Dr. Lorrimer is not well-liked and is even hated by some, the list of those Lorrimer has insulted or alienated is quite long, although several, such as Kerrison, Bradley, Mawson, and Howarth particularly hate Lorrimer. One must add to the fact that many of the potential suspects are either police officers or forensic scientists, and the difficulty of solving the crime is greatly increased as these types of professionals know everything about criminal investigations and thus would leave very few clues or evidence. It takes painstaking work to gather the paucity of clues and fit them together to pin the murders on Dr. Kerrison, a seemingly gentle, kind man who would be incapable of murder. Kerrison, though, is as ferocious as a mother bear protecting her cubs when he feels his children are threatened by Dr. Lorrimer's intent to inform Kerrison's ex-wife of Kerrison's affair with Domenica Schofield.

There are several very minor subplots that run through the main story—one is that of Angela Foley and Stella Mawson needing the money to purchase the cottage in which they live. Another subplot is the relationship between Inspector Doyle and his wife, who wants him to quit police work and move to the city and work in her father's business. A third sub-plot is the life and relationships of Domenica Schofield.

Death of an Expert Witness from Gale. ©2005-2006 Thomson Gale, a part of the Thomson Corporation. All rights reserved.