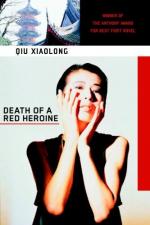 Death of a Red Heroine Quotes

Qiu Xiaolong
This Study Guide consists of approximately 52 pages of chapter summaries, quotes, character analysis, themes, and more - everything you need to sharpen your knowledge of Death of a Red Heroine.

""It's the market economy," Liu said. "The country is changing in the right direction. And the people have a better life"" (Liu Gaoliang, Chapter 1, pg. 4.)

"The episode came to him like an echo of his colleagues' criticism: Chief Inspector Chen was too 'Poetic' to be a cop" (Chapter 4, pg. 39.)

"He had a vague feeling that there was something about the case, something complicated, waiting for him. Something like a parallel to his writing experience" (Chapter 5, pg. 46.)

""Her name is Guan Hongying. Guan, you know, for closing the door. Hong for the color red, and Ying for heroine"" (Detective Yu Guangming, Chapter 6, pg. 49.)

""It's an important political case, comrade. That's something we should all be aware of"" (Commissar Zhang, Chapter 10, pg. 111.)

More summaries and resources for teaching or studying Death of a Red Heroine.

Death of a Red Heroine from BookRags. (c)2023 BookRags, Inc. All rights reserved.