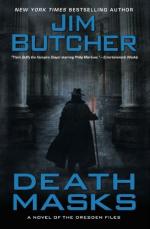 Jim Butcher
This Study Guide consists of approximately 53 pages of chapter summaries, quotes, character analysis, themes, and more - everything you need to sharpen your knowledge of Death Masks.

This detailed literature summary also contains Topics for Discussion and a Free Quiz on Death Masks by Jim Butcher.

This paranormal mystery thriller is one of a series of books chronicling the exploits of Harry Dresden, wizard and private investigator. While facing the prospect of a duel with a vengeful and powerful vampire, Harry also has to navigate the temptations posed by the return of a sexy ex-girlfriend, track a missing religious artifact, and honestly answer some difficult personal questions about faith. As the action builds relentlessly to a final, apocalyptic confrontation between the forces of good and evil, the narrative also explores thematic questions related to the value of personal integrity and the temptations of power.

When Harry appears on a talk show in his home city of Chicago, he is confronted with information on the location of his former girlfriend, with the presence of a powerful vampire challenging him to a duel, and with the doubt of a Roman Catholic priest who is nevertheless there to hire him. The emotional intensity of the situation puts pressure on a magical spell Harry created to rein in his magical powers. They erupt, causing explosions in the studio. Harry and the other guests flee, Harry in the company of the priest who, to Harry's surprise, reveals a desire to hire him. Almost before Harry can answer, he and the priest are shot at by gunmen whom Harry recognizes as being employed by mob boss and rival Johnny Marcone.

With that begins a complicated, intertwined web of plots and counter-plots, each studded with surprises and violent confrontations. A further conversation with the priest, Father Vincent, reveals that Harry is to be hired to retrieve the Shroud of Turin, a renowned and apparently powerful Christian artifact. Meanwhile, Harry's girlfriend, half-vampire journalist Susan Rodriguez, returns, engaging him in a renewal of their intense sexual feelings for each other. Harry is also shown the headless, handless body of a mysterious corpse, told that it actually died from being infected with multiple diseases, and asked to find out its identity. In the midst of all these challenges to his life and identity, Harry enlists the aid of several allies, including the sword wielding Knights of the Cross.

After consulting with spirits of information, Harry discovers the location of the stolen Shroud. His attempt to retrieve it is interrupted by the thieves and later by the unexpected intervention of a demon, who gets away with a decoy while one of the thieves gets away with the actual Shroud. Meanwhile, plans for the duel progress, and Harry uncovers more and more information about why, exactly, the Shroud was stolen. A second attempt to recover it ends with a violent confrontation not only with the first demon but with two more, one of whom (Nicodemus) reveals that he has destructive plans for both Harry and the Shroud. With the assistance of Shiro, one of the Knights who offers himself in Harry's place, Harry escapes from Nicodemus' control. In the aftermath of his escape, he and Susan give in to their mutual passion for each other and, later, discover even more secrets associated with the missing Shroud.

Harry eventually discovers that the day on which the duel between himself and Ortega is to take place is also the day on which Nicodemus intends to put his plans for the Shroud into action. He intends to use its power as fuel for a curse that would spread disease not only among the people of Chicago but, through them and via the thousands of travelers passing through Chicago's O'Hare Airport, among the peoples of the world. After surviving the duel with the cheating Ortega, Harry races to the airport where, in the company of the two other Knights, they discover that the death of Shiro has also been part of Nicodemus' spell, and that the demon is implementing the second stage of his plan - to spread his curse via train travelers in St. Louis.

Harry and the Knights, accompanied by Marcone, who is determined to gain possession of the Shroud no matter who opposes him, confront Nicodemus and his demons on the roof of a moving train, eventually retrieving the Shroud. As Harry recovers from his adventures, he is told the truth behind Shiro's actions, realizes that Susan has left for good, and faces one more confrontation with Nicodemus' power. This one he faces down himself, and this one he wins.