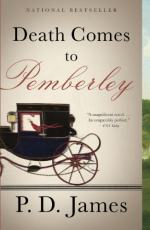 William Bidwell’s deathbed confession appears as a letter that is read in court. The letter removes the heinousness of Capt. Denny’s death and symbolizes how the rest of the characters are detached from the crime committed.

Throughout the novel, references are made to Wickham’s participation in a military campaign during the Irish Rebellion. At once this involvement becomes symbolic of Wickham’s capability of committing an atrocity, but it also gives him ownership of guilt. The author uses this to demonstrate how it is possible for Wickham to commit murder and the reader can suspect him of the crime, but establishes a justification for why Wickham may appear or feel guilty when he is innocent of the crime at hand.

Capt. Denny’s death occurs in the woodland. It symbolizes a dark place where people can get lost...