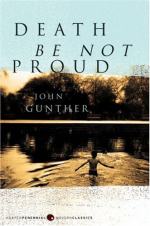 Death Be Not Proud: A Memoir Summary & Study Guide

John Gunther
This Study Guide consists of approximately 20 pages of chapter summaries, quotes, character analysis, themes, and more - everything you need to sharpen your knowledge of Death Be Not Proud.

Death Be Not Proud: A Memoir Summary & Study Guide Description

Death Be Not Proud: A Memoir Summary & Study Guide includes comprehensive information and analysis to help you understand the book. This study guide contains the following sections:

This detailed literature summary also contains Topics for Discussion and a Free Quiz on Death Be Not Proud: A Memoir by John Gunther.

Death Be Not Proud by John Gunther tells the story of Johnny Gunther, a young man who died on June 30, 1947. He was only seventeen years old. His father, a distinguished journalist and the author of this book, wrote Johnny's story to help others learn more about the devastating effects of a brain tumor.

Johnny spent his earliest years in Paris, Vienna, and London. His family came back to the United States when he was seven and a half years old, and they settled in Connecticut. Johnny loved to learn with a passion, and he attended Deerfield Academy in Massachusetts. One of his main goals was to graduate from there then move on to attend Harvard. No one knew about his illness until fifteen months before his death.

Death Be Not Proud offers the reader a glimpse of Johnny's life before his illness. It set up his character and showed his relationship with his parents, who were separated but amicable towards each other. It showed how Johnny and his parents discovered that he was ill and showed the gradual decline that led to death.

In the fifteen months of his illness, his family and the medical team did everything they could to help cure Johnny. They tried standardized treatments. They experimented with new treatments. They even tried to help him by drastically changing his diet. At times, it seemed as if the experimental methods were working, and everyone was filled with hope. Other times, it was obvious that he wasn't going to make it. Even when his health was deteriorating rapidly, Johnny did everything he could to keep current academically. He was particularly interested in science and kept trying to continue his experiments. He finished high school, and he applied to Harvard.

Johnny's death made a huge impact on the world, according to his father. He wrote about the letters that came to the family by the hundreds. The parents found out that slides from Johnny's brain would be of import to the world's neurological institute because Johnny's case was rare. He maintained his eyesight and managed to keep comparatively well right up to the point of death.

In the second part of the book, the author shared letters that Johnny had written throughout his life. The first letters were written when he was approximately seven years old, and the last letter was written months before his death. The letters were followed by entries from Johnny's personal diary. The first entry was in 1944, long before his illness. The last entries were four days before he died. Through these entries, it is clear to the reader that Johnny was obsessed with science and his experiments.

In the last part of the book, Johnny's mother reflected on parenting a child who was dying. She talked about life and death and wishes. She reflected on their life together, highlighting the good times, and addressed the areas she wished she had improved upon during his lifetime. The book closes with "Unbeliever's Prayer" written by Johnny slightly over a year before his death.

More summaries and resources for teaching or studying Death Be Not Proud: A Memoir.

Death Be Not Proud: A Memoir from BookRags. (c)2022 BookRags, Inc. All rights reserved.