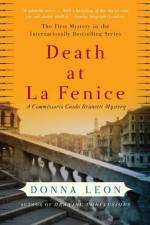 This detailed literature summary also contains Topics for Discussion and a Free Quiz on Death at La Fenice by Donna Leon.

Death at La Fenice chronicles Commissario Guido Brunetti's investigation of the death by cyanide poisoning of renowned German conductor Maestro Helmut Wellauer in the middle of a performance of La Traviata at the Venice opera house, La Fenice. Brunetti learns that Wellauer is a scoundrel. Worst, Brunetti learns that Wellauer was a pedophile, raping young girls of 12 or 13. Brunetti realizes Wellauer's wife poisoned him because he raped her daughter by a previous marriage, not killing him but causing him to go deaf. Wellauer takes the cyanide himself, after realizing his hearing loss is permanent and severe, and Brunetti helps the widow cover up her misdeeds for the sake of her daughter.

After the second act of La Traviata, famed conductor Helmut Wellauer does not return to the stage. He is backstage, poisoned. Commissario Guido Brunetti is called in and, examining the scene, he finds that cyanide has likely been put in Brunetti's coffee. Brunetti's beautiful widow, Elizabeth Wellauer, thirty years younger than her husband, is distraught and Brunetti sends her home. He speaks with the singers. The lead soprano, Flavia Petrelli, lies to him, telling him that she did not speak with the conductor during the performance. She was seen, however, going into the conductor's dressing room.

Brunetti finds out that Wellauer was moralistic and prejudiced against gays. He reneged on a deal with the gay director to place a friend of his in a performance, citing that he need not honor a deal with someone who is gay. He also threatened to tell Flavia's ex-husband about her lesbian affair with American millionaire archaeologist Brett Lynch, so that Flavia's abusive ex-husband could gain custody of their children. Brett admits that Flavia saw the conductor during intermission and that they fought about the threats.

Meanwhile, Brunetti learns that Wellauer may have been a Nazi and was definitely a womanizer. He hears about trouble with a now-elderly has-been opera singer, Clemenza Santina. He goes to see the singer, who is living in squalor, but she refuses to talk with him about the core of her hatred toward Wellauer. Brunetti finds out from a journalist the story that Wellauer impregnated Clemenza's sister, who died from an illegal abortion. Brunetti also uncovers that Wellauer was distracted before his death, seemed estranged from his wife, and learned from doctors that he was going deaf.

Wellauer made good on his threats to Flavia, as a letter comes from her husband's attorney, threatening action. Brunetti comforts Brett, telling her that they have no case without Wellauer's testimony. Then he visits Clemenza again and uncovers the true story. Clemenza's sister was only twelve, and she was raped and impregnated by Wellauer while he was having an affair with Clemenza. Putting the pieces together, Brunetti realizes that Elizabeth Wellauer, after finding that her husband sexually abused her daughter from a previous marriage, poisoned Wellauer with antibiotics to make him go deaf. Realizing that his music was gone, Wellauer killed himself. Brunetti reports the death simply as a suicide, not wanting to drag Elizabeth Wellauer's daughter through a hurtful court case.