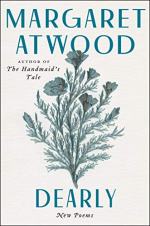 Margaret Atwood
This Study Guide consists of approximately 41 pages of chapter summaries, quotes, character analysis, themes, and more - everything you need to sharpen your knowledge of Dearly.

This detailed literature summary also contains Quotes and a Free Quiz on Dearly by Margaret Atwood.

The following version of this book was used to create the guide: Atwood, Margaret. Dearly. HarperCollins, 2020.

Margaret Atwood's poetry collection, Dearly, is divided into five numerical sections. While all of the sections are untitled, poems grouped within them tangentially explore a common overarching theme. The sections both act as containers for the poems, and structurally trace thematic evolutions of their own, thus working in tandem with each individual poem's central explorations.

In Section I, the author explores the rapid passage of time. The opening piece, "Late Poems," is a meta reference to the collection as a whole. The speaker describes all of the poems to come as delayed messages from one era to the next. In the poems following "Late Poems," the author further examines the way the past has hold over the individual. By the final poem in the section, "If There Were No Emptiness," the speaker is praising the past, present and future, glad for the stories these connections create.

In Section II, the author considers the ways in which human instinct has shaped cultural attitudes towards sex and gender for centuries. The early poems in this section depict the female body as innocent and fragile, while the speaker also acknowledges the way cultural expectations have always limited women's possibilities. In this section, the author combines images of animal sex, fairy tale princesses, unfaithful lovers, and exhumed warrior women in order to shape a complex commentary on femininity and sexual violence. In some of the poems, the speaker examines nature and history to understand the present. In other poems, she sings odes to women who suffered at the hands of sexual abuse.

The poems collected in Section III expound upon the changelessness of the human condition. By marrying images of mysterious fungi and rotting pumpkins, with those of drone warfare, forest fires, and alien invasions, the author considers the prophetic nature of fiction and myth. In "September Mushrooms," the author listens to the mushrooms for some omen of the future. In "Aflame," the speaker considers the autumn forest fires as both old prophecies coming true, and as foreshadowing for an even darker future. The aliens in "The Aliens Arrive," the siren in "Siren Brooding on Her Eggs," and the spider in "Spider Signatures," all have messages for the speaker as well. Each fictional character or living creature, each forgotten fairy tale, is a lesson from which humans could learn if they only paid attention.

The poems grouped in Section IV, draw upon the images from the section prior, as the author further examines humans' devolved relationship with the natural world. The speaker in "Walking in the Madman's Wood," "Feather," "Fatal Light Awareness," "Fear of Birds," "and "Short Takes on Wolves," attunes herself to the scenes, sounds, and creatures of the wild in order to understand them better. In the woods, she realizes that before humans claimed the land, the forest was a living and dangerous creature with its own identity and capabilities. By collecting a feather and turning it into a quill, the speaker refuses to let a dead bird's life go to waste. The middle of the section shifts in tone, as the speaker seems to grow increasingly disgusted with the pollution and destruction she sees all around her. Human ignorance and greed has turned the planet into an arid, inhospitable place that suddenly resembles a graveyard.

In the final grouping of poems found in Section V, the author combines images of the youthful and aging body to consider the bittersweet nature of growing old. In some of these concluding pieces, the speaker describes her aged physicality at length, describing her body like a prison from which she longs to be released. In others, the speaker searches for reconciliation with her past, present, and imminent and inescapable future. In "Sad Utensils," "Disenchanted Corpse," and the collection's title poem, "Dearly," the speaker particularly mourns the evolution of language. Without the language of her past, she no longer knows how to translate her lived experiences to the next generation. In the final poem, "Blackberries," however, the speaker assumes a more resigned, yet grateful, tone. She is unafraid of death, and glad for the life she has lived, the wisdom she has garnered.

More summaries and resources for teaching or studying Dearly.