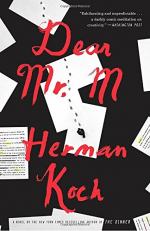 The following version of this book was used to create the guide: Koch, Herman. Dear Mr. M. Hogarth, 2014.

Dear Mr. M begins with a man writing to his upstairs neighbor, a quickly-aging writer referred to only as M. Although falling out of popularity, M has had one rather major success thirty or forty years prior with a book based upon the case of a teacher whose disappearance was connected to two of his students (one of whom he had been having an affair with). The neighbor keeps careful watch over M, recording his life with great detail and mocking asides. The neighbor intercepts M's mail, follows M's wife down to their holiday home in order to manufacture a meeting, and slowly begins to insinuate himself into M's life. In the meantime, in his missives directed to M, the neighbor reveals himself to be one of the teenagers upon whom M's book, Payback, was based. He resents M’s irresponsible use of his life story. He claims to have new information for M regarding the disappearance of the teacher Jan Landzaat, and begins a story of the day that Landzaat appeared on the doorstep of the house where the neighbor and his girlfriend, Laura (who had previously been involved with Landzaat) were staying in the town of Terhofstede.

This narrative, as told by the neighbor, becomes interspersed with M's impressions of his own life and dwindling literary career and Laura's recollections beginning from the time that she met the neighbor (whose name, it is revealed, is Herman) to the moment that he returned alone from a walk that he and Landzaat had taken to try and find a mechanic for Landzaat's broken-down car to announce that he had "lost" Landzaat (144). These three stories begin to intertwine more closely when M, at the behest of his wife, meets Herman and gives him an interview. M invites his neighbor to accompany him to the annual Book Ball when his wife has to stay home with their sick daughter, and the neighbor helps M home after he gets in a fist fight with one of his colleagues. M, suffering from a concussion, reveals that he knows who Herman is. Herman comes to M's house to share his version of events, but M loses consciousness just as Herman reaches the conclusion of his tale. The viewpoint briefly switches to that of Jan Landzaat on the day that he drove down to Laura’s house in Terhofstede. Landzaat, it is revealed, purposefully ran his battery down when he became stranded at his ex-lover’s home by a blizzard and, on the walk into town with Herman in order to find a mechanic, had decided to separate himself from Herman and disappear in order to frame the students for his supposed death. As M dips in and out of consciousness, he recalls that, just as he was finishing the novel Payback, a very-much-alive Landzaat had contacted him from Paris. M had met with Landzaat there and, disturbed by the idea that the ending of his book would now be ruined by Landzaat's survival, had killed the man by pushing him into the river. M dies, and is relieved to find that there is nothing after death.