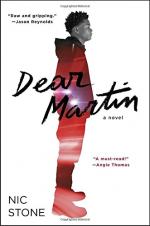 January 26: news transcript. The newscaster announces the “dispute over loud music,” resulting in a death and a critical injury (123). The shooter was off-duty Atlanta PD officer Garrett Tison.

Twenty-seven days after the shooting, Justyce leaves the hospital for the funeral. He cannot face the media circus outside, especially given the speculation trying to divert blame onto the boys. The news calls Justyce “the Boy Who Survived,” and the funeral guests stare (126). Despite his punctured lung and broken ribs, his right arm is the worst injury: three surgeries give him back feeling in his fingers. Seeing SJ reminds Justyce of her visits to the hospital, when she wept and stroked his face. He remembers Melo wailing, and his mother begging forgiveness when she had to leave for work. During the...