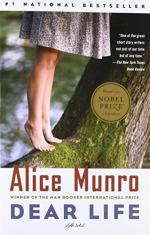 This story is narrated in the first-person past tense by an unnamed narrator who shares basic biographical details with the author. The story opens in rural Ontario, where the narrator was raised. Her parents were both born and raised on a farm. As married adults, they lived in a house across the Maitland River from an incorporated township. The narrator was born in 1931. She did not like the primary school she attended, so her father bought a shed in town and paid town taxes so that the narrator could attend the town’s superior school. Her father raised minks and foxes to sell for their furs. At the new school, the narrator befriended a girl her age, but her mother soon forbade the narrator from spending time with the girl, as her mother had been a prostitute who died of a venereal disease.

The narrator was studious and intended to complete high school, which was atypical for that time and place. She helped with work in and around the house and loved reading novels. The narrator’s parents fur business eventually failed due to a decreasing demand, so the father took a job as a watchman in a local foundry. Meanwhile, her mother began to exhibit symptoms of early onset Parkinson’s disease. The disease gradually but steadily worsened.

When the narrator was young, her mother would sometimes tell her anecdotes about an eccentric local woman named Mrs. Netterfield. Mrs. Netterfield was said to have once chased a delivery boy with a hatchet because there was an error in her grocery delivery. The narrator finds this story hard to believe. Her mother says that Mrs. Netterfield once approached her house and looked in the windows before eventually leaving. As an adult, the narrator lives in Vancouver with her husband, but she still has a subscription to her hometown’s newspaper. One day, she sees a poem in the newspaper that was apparently written by Mrs. Netterfield’s daughter. The narrator looks through old records and discovers that the Netterfield family had once lived in the house where the narrator grew up.

The narrator’s mother is deceased, and the narrator did not go back to her hometown for the funeral due to the cost of travel. The narrator wishes that she could still speak to her mother. She regrets not going to her mother’s funeral, and she regrets that they did not have a closer relationship.