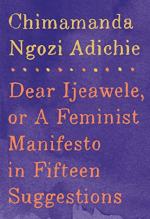 Related Topics
Americanah
Half of a Yellow Sun
The Thing Around Your Neck
We Should All Be Feminists
Zikora: A Short Story

Chimamanda Ngozi Adichie
This Study Guide consists of approximately 35 pages of chapter summaries, quotes, character analysis, themes, and more - everything you need to sharpen your knowledge of Dear Ijeawele, or A Feminist Manifesto in Fifteen Suggestions.

Dear Ijeawele, or A Feminist Manifesto in Fifteen Suggestions Summary & Study Guide includes comprehensive information and analysis to help you understand the book. This study guide contains the following sections:

This detailed literature summary also contains Topics for Discussion on Dear Ijeawele, or A Feminist Manifesto in Fifteen Suggestions by Chimamanda Ngozi Adichie.

The following version of this book was used to create this study guide: Adichie, Chimamanda Ngozi. Dear Ijeawele, or a Feminist Manifesto in Fifteen Suggestions, 2017.

In this non-fiction work, Chimamanda Ngozi Adichie frames her thoughts on feminism and raising children in the form of a letter to one of her friends named Ijeawele. The author includes an “Introduction” addressed to the book’s readers, contextualizing the letter and its publication. As she writes in her introduction, Adichie's friend Ijeawele, shortly after giving birth to a baby girl, had asked the author how to raise her baby girl a feminist. At the time, the author decided to write Ijeawele a letter, which she hoped would be both “honest” and “practical” (4). The author mentions that since she has now had a baby girl too, she appreciates how much easier it is to “dispense advice” (4) about raising a child than it is to actually raise one. Nonetheless, the author concludes her remarks in her introduction with the recognition that it is “morally urgent” (4) to have these conversations.

Thus, the author closes her introduction and begins her letter addressed to Ijeawele. She congratulates Ijeawele on the birth of her daughter, Chizalum, and introduces Ijeawele (as well as her general readership) to her Feminist Toolkit. Inside there are two conceptual tools. The first is the premise or belief that: “I matter equally. Full stop” (6). The second tool is a test asking whether you can “get the same results” (6) in any given scenario if you switch the genders. If you cannot, the disparity is a form of gender-based discrimination or bias.

The author then begins a list of her fifteen suggestions, each of which is accompanied by commentary ranging from one page to seven pages long. In the first suggestion, the author reminds Ijewele that while motherhood is important, she must also be a “full person” (7) and not feel pressured to quit her job. In the author’s second suggestion, she points out that women have been socially conditioned to see themselves as the primary providers of childcare. The author instead recommends that mothers and fathers share childcare and household responsibilities equally. In the third suggestion, the author rejects the language and concept of “‘gender roles’” (14) and tells Ijeawele to make her own choices without considering certain activities “for boys” and others “for girls.”

The author’s fourth suggestion describes an ideological phenomenon she calls “Feminism Lite.” In her fifth suggestion, the author tells Ijeawele to teach her daughter to love reading. In the author’s sixth suggestion, she hopes that Ijeawele will learn to question language and to reject any language that refers to women only in terms of their relationship to men.

For her seventh point, the author suggests that marriage not be discussed as an “achievement” (30), a signal that is sent more to girls than to boys and that encourages girls to see themselves as wives rather than people. The author’s eighth suggestion encourages Chizalum to reject the expectation that girls have to be “likeable” or “nice.” Instead, the author encourages Chizalum to see herself as “honest,” “kind” and “brave” (38). In the author’s ninth suggestion, she encourages Ijeawele to give her daughter a sense of her identity, and especially her Igbo, Nigerian and African roots.

The author’s fourteenth suggestion points out that women are neither worse nor better than men, nor are women necessarily feminists while men are not. In the author’s final, fifteenth suggestion, she tells Ijeawele to teach her daughter about difference and to make different a normal part of her life. The author then wishes that Chizalum grow up happy and healthy. Finally, she asks jokingly whether Ijeawele has a headache after her answer and tells her next time not to ask the question at all if she does not want a lengthy answer.

More summaries and resources for teaching or studying Dear Ijeawele, or A Feminist Manifesto in Fifteen Suggestions.