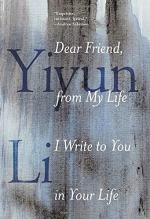 Dear Friend, From My Life I Write to You in Your Life Summary & Study Guide

Yiyun Li
This Study Guide consists of approximately 45 pages of chapter summaries, quotes, character analysis, themes, and more - everything you need to sharpen your knowledge of Dear Friend, From My Life I Write to You in Your Life.

Dear Friend, From My Life I Write to You in Your Life Summary & Study Guide Description

Dear Friend, From My Life I Write to You in Your Life Summary & Study Guide includes comprehensive information and analysis to help you understand the book. This study guide contains the following sections:

This detailed literature summary also contains Topics for Discussion on Dear Friend, From My Life I Write to You in Your Life by Yiyun Li.

The following version of this book was used to create this study guide: Li, Yiyun. Dear Friend, from My Life I Write to You in Your Life. Random House, 2017. Random House Trade Paperback Edition.

Yiyun Li opens the book with a discussion of the concepts of before and after as they relate to time. She also introduces the idea of suicide by recounting both the deaths of friends and her own hospitalization and treatment for depression. She writes about the nature of time, depression, and sadness. She likes the idea of being immune to life but knows that only the dead can be so. Li also writes about her career background in science and her former life in Beijing. From reading the notebooks of Katherine Mansfield she finds the phrase: “Dear friend, from my life I write to you in your life.” This, she feels in the reason for writing and reading: to bridge the distances between people.

In the midst of her depression, Li travels to Ireland for a festival celebrating the work of Irish writer John McGahern. Having read McGahern’s memoir, Li contemplates the nature of autobiographical writing, a genre that does not resonate with her as a writer. Unlike a memoirist, Li does not want to revive old feelings. Instead, she writes with the goal of leaving feelings behind. The idea of autobiographical writing prompts Li to reflect on her childhood and she wonders why one chooses to write autobiographically. Instead of revealing herself through her work, Li seeks a form of erasure.

Li writes about the societal perceptions of suicide by telling the story of Stefan Zweig, a writer who committed suicide with his wife during the Second World War. She references Thomas Mann’s response to the event as an example of how suicide is judged and questioned by outsiders. She equates suicide with melodrama for its internal need to feel and its refusal to meet anyone’s expectations. Li explores the nature of melodrama in life as well as the reality of suicidal depression from a more internal perspective. She shares both her own thoughts as well as the writings and words of others such as Zweig, Katherine Mansfield and James Alan McPherson.

Li then writes about some of the authors who have had an impact on her such as Ivan Turgenev and Marianne Moore. When discussing their lives and works, Li emphasizes both their relationship with their mothers, asserting that one reads and rereads writers with whom one feels a kinship. Although Li strives not to be an autobiographical writer, she recognizes that elements of the self cannot help but make their way into one’s work. At the same time, she fears that her words will be misinterpreted and understands the desire that some writers have for their journals or letters to be destroyed.

Suffering from depression, Li is unable to write and turns to reading instead. In this chapter she analyzes the works, letters, and journals of several writers including Philip Larkin, Katherine Mansfield, Thomas Hardy, and Elizabeth Bowen. She uses the themes of those works such as melodrama and selfishness to also discuss how these themes apply to her own life. In the next chapter, she discusses the idea of language to a great extent. She writes about how she has transitioned from a life in Chinese to one in English and what this means for both herself and her career. The abandonment of her native language is a kind of salvation for Li but it is problematic for others around her.

In one chapter, Li intersperses her own thoughts on happiness, writing, and the relationship between reader and writer with quotes from everyone from famous writers to people in her own life. She reflects on how one’s work is defined by others, the private freedom of loyalty, and the posthumous relationship between writer and reader.

Li does not write to express herself but to find a new way to see the world. Discovering the work of writer William Trevor is what prompts her to abandon her career in science and pursue professional writing. Over the years, she and Trevor develop a friendship in which they discuss everything from death to writing. Li now knows that books do not provide answers but that stories can provide hope, as Trevor once said.

In the afterword, Li writes that her goal with these essays has not been coherence or consistency. Ironically, since this book is considered a memoir, she maintains that one cannot write about one’s own life effectively. In the end, Li no longer wants to find a ladder out of her world, but to succeed in waiting it out.

More summaries and resources for teaching or studying Dear Friend, From My Life I Write to You in Your Life.

Dear Friend, From My Life I Write to You in Your Life from BookRags. (c)2022 BookRags, Inc. All rights reserved.