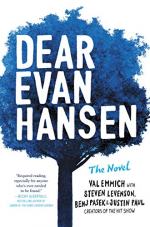 Val Emmich
This Study Guide consists of approximately 44 pages of chapter summaries, quotes, character analysis, themes, and more - everything you need to sharpen your knowledge of Dear Evan Hansen.

The novel begins with a prologue narrated by the ghost of Connor Murphy, a high school senior who committed suicide. The first chapter switches to the narration of Evan Hansen, a senior who goes to school with Connor Murphy, on the morning of the suicide. Evan starts the morning by writing a letter to himself, as his therapist has instructed him to do. He is supposed to tell himself why the day is going to be a good one, but he cannot think of any reasons why his first day of senior year is going to be good. Over the summer, he broke his arm while working as an apprentice ranger at a Ellison Park. His mother encourages him to put himself out there and ask some of his classmates to sign his cast.

At lunch, Evan and his friend Jared are in line when Connor Murphy walks by. Jared makes a mean comment about his hair. Connor turns around and confronts Jared, who walks away. Evan laughs nervously, and then Connor pushes him to the floor. Connor’s sister, Zoe, who Evan has been distantly in love with forever, walks up to Evan and asks him if he is okay. Later, Evan goes into the computer lab and tries again to write his letter to himself. Instead of being chipper and happy as he usually is in order to impress his mother and his therapist, Evan expresses his emotions truly, writing about how alone he is, and how much he wishes he could be close to Zoe. He prints his letter, and then runs into Connor Murphy, who seems apologetic. They talk about books for a moment, and then Connor offers to sign Evan’s cast so they can both pretend they have a friend. After they share their moment, Connor picks up Evan’s letter and reads the part about Zoe. He thinks Evan is messing with him, so he storms out with the letter.

Evan spends the next few days dreading what Connor is going to do with the letter. He imagines that he will post it online, or make copies of it to pass out to the school. But he is shocked when he is called into the principal’s office to talk to Mr. and Mrs. Murphy, who inform him that Connor has killed himself and left Evan a suicide letter. They are happy that Connor had a friend he felt he could confide in, because they had thought he did not have any friends at all. Evan tries to tell them the truth, but when they see Connor’s signature on Evan’s cast, they believe his story has been confirmed, and invite him to the funeral.

Evan goes to Connor’s funeral intending to straighten out the truth with the Murphys, but he is unable to disappoint them. They invite him to dinner, and he decides to go. While at dinner, they ask him about his relationship with Connor, and he says that he and Connor used to go to an apple orchard. By coincidence, the Murphys did spend much time at an orchard when Connor was young. Zoe does not believe Evan’s story, though, and thinks he was only friends with Connor because of drugs, but Evan assures her this is not true.

Evan goes to school and is shocked to discover that he is popular because of his imagined friendship with Connor. In order to prove his story, Evan and his friend Jared make fake emails to show the Murphys. In the emails, they create a kind and flawed Connor who wants to be better, and a supporting and encouraging Evan. When a sex scandal involving a teacher diverts the attention of the students, Evan’s friend Alana convinces him to start a foundation in order to prevent Connor’s memory from fading, and Jared agrees to design the website. The Murphys are excited about the Connor Project, and agree to help organize an assembly at the school. Evan gives a speech about Connor, and the video goes online. When he wakes up the next day, thousands of people have seen and commented on his video, and the Connor Project is a viral sensation. Zoe shows up at Evan’s house and thanks him for what he has done for her brother, and then kisses him.

In the second part of the novel, Evan continues to record videos and inspirational videos for the Connor Project with Alana. When they start to lose followers, Alana comes up with an idea to start a fundraiser to revive the apple orchard. Evan starts dating Zoe seriously and becomes a pseudo-son to the Murphys. Jared begins to get jealous that Evan is receiving all the positive attention. When Zoe realizes that Evan does not have enough money to go to school, she surprises him by inviting his mother over for dinner. Her parents announce that they would like to use Connor’s college fund to send Evan to school. His mother is shocked that Evan has gotten so close with the Murphys without telling her anything about his relationship with them. She declines the Murphys' offer and leaves without eating dinner. Evan goes home and gets in a fight with his mother.

The next day, Alana gets made at Evan for not focusing on the Connor Project. She tells him that she suspects that the emails between him and Connor are fake, and that he was not even friends with Connor. In order to disprove her suspicions, Evan sends her the original letter. Without asking his permission, Alana posts the letter online. The internet is outraged by the thought that Connor’s family was not as supportive as they should have been, so the internet accused the Murphys of being rich and cruel. Someone published their address online, and someone else posted Zoe’s phone number. Evan went over to the Murphys' house and was upset to see the family arguing with one another, accusing each other of being responsible for Connor’s death. Evan interrupted them and finally admitted the truth.

Evan ran outside and flirted with the idea of allowing a car to hit him. Connor’s ghost appeared and compelled him to move. Evan climbed up a tree and remembered that he had broken his arm not by falling out of a tree, but by jumping on purpose. He goes to his mother’s work and tells her the truth about everything.

In the epilogue, Evan quits the Connor Project and tells Jared that the Murphys know the truth. They wait to get arrested, but the Murphys never tell anyone about what happened. Evan is approached by a boy named Miguel who happens to be the real secret friend and lover of Connor. Evan meets up with Zoe in the revamped orchard, a year after they broke up, and tells her about Miguel. Zoe forgives Evan, then leaves, and he writes himself a letter in which he hopes that the orchard will help kids who feel alone and helpless in the future.