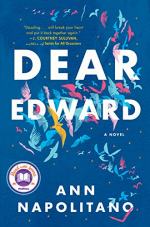 Ann Napolitano
This Study Guide consists of approximately 44 pages of chapter summaries, quotes, character analysis, themes, and more - everything you need to sharpen your knowledge of Dear Edward.

The following version of this book was used to create this study guide: Napolitano, Ann. Dear Edward. New York: The Dial Press, 2020.

The novel centers on a boy named Edward Adler, who is the sole survivor of a tragic plane crash. The novel begins in the year 2013, on the day of the flight in question. Edward is 12 years old. He boards the plane with his older brother Jordan, his father Bruce, and his mother Jane. Bruce is a math professor who was recently denied tenure, and Jane is a screenwriter. The family is moving from New York to Los Angeles so that Jane can acquire more screenwriting jobs. Other passengers on the flight are Linda Stollen, Crispin Cox, Mark Lassio, Benjamin Stillman, and a woman named Florida. The novel is structured to alternate back and forth between two parallel narratives. One narrative follows the flight itself, and the other narrative follows Edward in the years following the flight.

The scenes that take place on the plane shift focus between passengers, providing exposition on each character, their lives, and their aspirations. Crispin Cox is a man in his seventies who has been extremely successful in business. He has recently been diagnosed with cancer and is flying to Los Angeles for treatment. He is greedy and selfish and does not have a close relationship with any of his children. Mark Lassio is a successful businessperson in his thirties. He is heading to Los Angeles to close an important deal. He spends the flight flirting with a flight attendant. Linda Stollen is a 25-year-old x-ray technician who has recently discovered that she is pregnant. She is flying to Los Angeles to see her boyfriend, whom she hopes will propose marriage. Florida is a charismatic but somewhat eccentric woman who has recently left her husband and intends to begin life anew in California. Benjamin Stillman is a soldier in the U.S. Army. He is a closeted homosexual man who struggles with his sexuality due to internalized homophobia.

The plane crashes in Colorado due to a mistake made by the copilot. The plane lands in an open field. Edward is the only survivor. Edward becomes the focus of much media attention due to this event. He is adopted by his aunt and uncle: Lacey Curtis and John Curtis. They are kind to him, but Lacey and john are struggling with marital troubles due to their inability to conceive a child. Edward forms a bond with Shay, a girl who lives next door and who is the same age as him. Edward struggles with the emotional effects of the trauma he has endured, and he is often emotionally withdrawn. Edward attends therapy, and his emotional state gradually improves over the following years. He receives hundreds of letters from relatives of people who died on the plane. Edward does not respond to the letters, but he feels comforted by the feeling of shared grief.

Edward receives $5 million as a settlement from the airline, and he receives $7 million from the brother of Mark Lassio. Edward resolves to give away as much money as possible to charitable causes. Edward and Shay continue to be friends, and at age 15, they declare their love to each other. At age 18, Edward and Shay visit the memorial that was built on the site where the plane crashed. Edward feels that he has made a lot of progress in his emotional healing. He feels that he has accepted the loss and trauma and that he can live with it as he moves forward with his life.

More summaries and resources for teaching or studying Dear Edward.