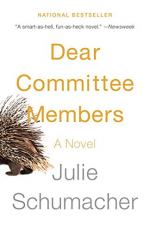 Dear Committee Members is a witty collection of letters of recommendation that explore the life of Jason Fitger over the course of one academic year.

Tasked with writing letters of recommendation for students, acquaintances, and colleagues, Jason uses his platform to recommend, dissuade, and vent his frustrations to captive audiences.

Jason Fitger is a creative writing professor whose letters often involve recommending creative writing students for literary residencies and to his own literary agent, Ken Doyle. The student he is most concerned with is Darren Browles, a young man in whom Jason seems himself. Darren is working on a novel that retells Melville’s Bartelby the Scribner. Fitger's attempts to get Darren a residency to allow him the funding to concentrate on his novel are refused.

Fitger's efforts are complicated by his past relationships with people in the academic community. His ex-wife Janet and his former mistress Carol both work at the university. Eleanor, a woman with whom he attended graduate school and had a relationship with is also someone to whom he writes his letters. He tries to reconnect with Janet and keep Carol from making a mistake career-wise, but he does so in a manner which drives the women away from him.

Increasingly isolated in his department, Fitger confronts both the dean and chair of the English department about the status of the department, issues with other faculty members, and how the department is facing a slow death through his letters.

He continues to try and find funding for Darren, reaching out to other departments and even the radio station after a large monetary gift was bequeathed. While he has no luck in finding a place for Darren, he begins to witness the successes of another student he recommended, Vivian Zelles.

Not only is Vivian the recipient of a six-month literary residency, she has gained representation with Ken Doyle at his agency. After Ken secures Vivian a six-figure deal for her first book, Jason begins to get more requests from past students to recommend them to Ken’s agency. Jason expresses his displeasure at Ken’s refusal to accept Darren as a client.

As Jason begins to doubt his assessment of Darren’s literary talent, he sends Darren’s manuscript to Hanf, one of Fitger's former creative writing professors who is now becoming senile. Jason learns that Hanf gave an interview claiming Darren’s idea as his own.

As the academic year comes to a close, Jason learns that Darren has committed suicide. Jason feels guilty, wondering if his misjudged Darren’s work because he saw himself in Darren. Because he could not find funding for Darren while he was alive, Jason decides to start a scholarship with his own money in Darren’s name. Eleanor contributes to the fund, and the two begin discussing the possibility of a reunion of the group of students who attended the writing seminar taught by Hanf.

As the novel comes to a close, Jason tries to embrace the promise and optimism of a new school year.