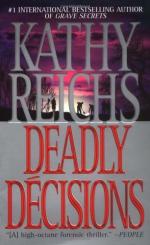 Kathy Reichs
This Study Guide consists of approximately 37 pages of chapter summaries, quotes, character analysis, themes, and more - everything you need to sharpen your knowledge of Deadly Decisions.

In the novel Deadly Decisions, Dr. Temperance Brennan, internationally renowned forensic anthropologist, tells the story of her role in solving a series of murders amid Quebec's violent motorcycle gang war. In telling the story, Tempe brings both her knowledge as a scientist and her dark sense of humor to the narrative.

The novel opens after the death of an innocent young girl. She is killed during an exchange of gunfire between rival motorcycle gangs, with the battle also involving a premature bomb detonation. In the course of the police investigation into those responsible for the latest violence, the police uncover information about some past murders connected to a local motorcycle gang. Tempe is called in to direct the excavation of some old gravesites. Tempe and the police uncover more than they expect when, in addition to the remains of two adults, they also find the remains of yet another young girl.

The discovery of yet another child victim deeply troubles Tempe, who has a history of working child tragedies. In her effort to track down the killers, she travels from Montreal to North Carolina to gain evidence. Tempe also gets assigned as a special liaison from the medical examiner's office to a law enforcement task force in charge of investigating motorcycle gang related crime. Tempe learns far more about outlaw biker culture than she ever wanted to know, and soon she herself is a target of "les motards," criminal bikers.

To further complicate matters, Tempe encounters disturbing news in her personal life. She learns that her romantic interest, Detective Andrew Ryan, has been arrested for criminal activity, including drug trafficking and possession of stolen property. Throughout much of the novel she tries in vain to contact Ryan to get his side of the story. This hardship is one Tempe has to bear alone, since she has no one else with which to share her pain.

Yet another complication comes in the unexpected arrival of Tempe's teenage nephew, Kit. For all of Kit's life, he and Tempe have had a close relationship, but his arrival comes at a time when Tempe is preoccupied with murder investigations. In addition, it seems Kit has developed an acute interest in motorcycles and motorcycle gang culture as well as having acquired a minor criminal record. When asking if Kit can stay with Tempe, Kit's mother conveniently neglects to mention Kit's recent legal troubles.

The regular obstacles facing a scientist trying to draw clues from old bones is not the only adversity Tempe faces at work. She is often also at odds with her colleagues. Two colleagues in particular present cause for annoyance to Tempe. Detective Claudel consistently treats Tempe with disdain, and his partner Constable Quickwater rarely treats Tempe in any fashion. In fact, he most often completely ignores Tempe.

All of Tempe's obstacles and frustrations remain until the end of the novel when they combine to form an unexpected and exciting conclusion.

More summaries and resources for teaching or studying Deadly Decisions.