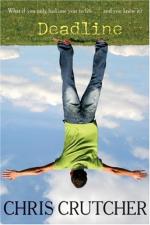 Chris Crutcher
This Study Guide consists of approximately 39 pages of chapter summaries, quotes, character analysis, themes, and more - everything you need to sharpen your knowledge of Deadline.

This detailed literature summary also contains Topics for Discussion and a Free Quiz on Deadline by Chris Crutcher.

Deadline by Chris Crutcher tells the story of Ben Wolf, an eighteen-year-old high school senior who is dying from a rare blood disease. He decides to forgo treatment and live his last year to the fullest.

Ben lives in an extremely small town in Idaho where everyone has known him from birth. He is very short of stature and has an uncommonly close relationship with his younger brother, Cody, who is taller than he is. When Ben goes for his sports physical, his doctor informs him of his blood disease and tells him that he has less than a year to live. Ben decides not to tell anybody, and he decides to deny treatment. The doctor is very upset by this decision, but Ben threatens to take legal action against him if he tells anybody. He has the right to make his own choices since he is eighteen years old.

Knowing that his time is limited, Ben decides to take full advantage of every moment he has left on the earth. Despite his small stature, he joins the football team instead of cross-country, where he generally excels. He also decides to try to get the attention of Dallas Suzuki, one of the smartest and most beautiful girls in the school in his opinion.

Ben is interested in literature, and he reads nonfiction. It frustrates him that teachers, especially his history teacher Mr. Lambeer, educate the students using biased material. Ben uses his own knowledge of the literature he has read to stand up to the teacher repetitively, challenging common precepts Mr. Lambeer uses the classroom. He decides that for his class project, he will try to get a street in his mostly Caucasian town named after Malcolm X. Mr. Lambeer threatens to fail him if he does this, but Ben doesn't care because he knows he won't be going to college since he is going to die anyway.

To his great surprise, Ben develops a close relationship with Dallas, and he also becomes close to the town drunk. He agrees to meet with a counselor to placate the doctor, but the counselor can't handle his case because it affects her too emotionally. Ben doesn't appreciate her replacement and denies therapy. The more he keeps his illness a secret, the more difficult it becomes because he feels as if he is betraying those that are closest to him. The only being he can talk with about the situation is Hey-Soos, who comes to talk with him when he is in a dream state.

The football season goes extremely well, and Ben and Cody have an incredible season together. At first Ben doesn't feel any of the negative effects of his illness. As he cultivates his relationships and continues his quest for the pure truth in other areas, Ben realizes that life is more convoluted than he originally thought. He realizes it is wrong to keep his impending death away from those that love him so he tells them about it. They help him through his final days.