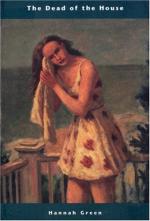 Compare & Contrast The Dead of the House by Hannah Green

Hannah Green
This Study Guide consists of approximately 46 pages of chapter summaries, quotes, character analysis, themes, and more - everything you need to sharpen your knowledge of The Dead of the House.

Late 1940s: The Indian Relocation program uses government money to move Native Americans off of the reservations. The aim is to assimilate them into mainstream culture and provide economic and social opportunities.

1970s: The American Indian Movement (AIM) stages protests for the rights of native peoples, including marches on Washington, the occupations of the BIA (Bureau of Indian Affairs) Offices, and the sieges at Wounded Knee and Alcatraz Island.

Today: Government efforts strive to make Native American groups economically self-sufficient. After concerted counterintelligence operations by the Federal government, American Indian protest movements have been considerably weakened Leonard Peltier, an AIM member, is still imprisoned on what many to believe to be false charges.

1950s: In the postwar housing boom, suburbs begin springing up around major urban areas.  This is fueled by the building of the national highway system.

More summaries and resources for teaching or studying The Dead of the House.

The Dead of the House from Gale. ©2005-2006 Thomson Gale, a part of the Thomson Corporation. All rights reserved.