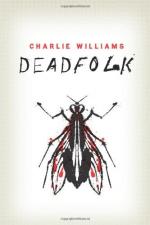 Charles Williams
This Study Guide consists of approximately 40 pages of chapter summaries, quotes, character analysis, themes, and more - everything you need to sharpen your knowledge of Deadfolk.

This detailed literature summary also contains Topics for Discussion and a Free Quiz on Deadfolk by Charles Williams.

The first novel by Charlie Williams, Deadfolk, paints a disturbing portrait of an English town called Mangel that appears to be dominated by thieves and cutthroats. In the noir tradition of dark, violent fiction, and particularly the style called hardboiled crime, this novel is narrated by its central character and one of the town's principal criminals, Royston Blake. He works as a doorman at the popular Hoppers Wine Bar & Bistro, and at first, he seems to be a likeable enough sort, although clearly rough around the edges. The reader learns immediately that Blake's wife was killed in a fire at Hoppers, and that he was questioned in connection with her death, along with a co-owner of Hoppers, Lee Munton. It soon becomes apparent that Lee and his brothers, Baz and Jess Munton, are angry with Blake, which worries the doorman. Blake is the biggest, strongest man in town, but the Muntons are the most frightening family. What is more, Blake has "lost his bottle," or gone soft, since the death of Beth. One night outside the bar, Baz publicly humiliates Blake by pushing and slapping him, and whispers that he knows Blake killed his wife. The Muntons start following Blake around in their van, locally known as the Meat Wagon, which makes him even more nervous. While drinking with his two friends, Legs and Finney, Blake is demonstrating how to do a head-butt when he accidentally butts Legs, knocking him out. This creates uneasiness between the two men, which proves to be disastrous.

Blake describes how Lee Munton commanded him to burn down Hoppers for the insurance money. Blake had Finney do the job, but Blake does not know how Beth got inside the place after hours. When Blake asks Legs for advice about the threat of the Muntons, Legs counsels him to catch Baz Munton alone and beat him up. Blake does so, but goes too far, and kills Baz. He puts the body in his cellar. The next day, when he goes downstairs to dispose of the body, it is missing. Meanwhile, Lee Munton tells Blake he must help the brothers rob Hoppers, or else they will tell the police what they know about Beth's murder. Blake complies, but they encounter the new owner, Fenton, who is asleep in the office. When it looks like the Muntons will shoot Fenton, Blake intervenes and then gets away. The Muntons have stolen something in a box that Fenton wants back. He offers Blake half-ownership of Hoppers if he will retrieve this object, but he will not say what it is. Blake agrees and a series of confrontations, thefts, chasings, and killings occur as the Muntons, Blake, and a mysterious man who has come from another town all vie to obtain this thing that Blake calls a "doofer." Blake, who is admired by several women in town, gets help from them and from Finney. Eventually, Finney confesses to Blake that he put Beth in the bar before he burned it, because she was having an affair with someone else. The other person turns out to have been Legs, who is also the one who told the Munton brothers that Blake had killed Baz. Amidst a welter of double-crosses and lies, the chase for the doofer finally ends in a bloodbath. Blake emerges unscathed but there is no doubt now that he is every bit as bad as the novel's other thugs and murderers.

More summaries and resources for teaching or studying Deadfolk.