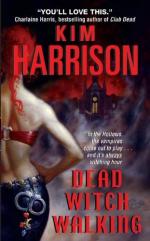 Kim Harrison
This Study Guide consists of approximately 36 pages of chapter summaries, quotes, character analysis, themes, and more - everything you need to sharpen your knowledge of Dead Witch Walking.

Dead Witch Walking by Kim Harrison is a story of a world in which witches, vampires, pixies and other creatures exist alongside humans, although not completely in peace. The main character in the story, Rachel Morgan, is a witch who quickly gets pulled into a conspiracy that goes deeper than Rachel realizes. Along with help of her friends, a vampire, pixie and a human, Rachel soon finds that there is more than one person looking to kill her, and it will take all of her will just to stay alive.

Rachel Morgan is a runner for I.S., Inlander Security. She has been given really horrible jobs of late, such as when Rachel is sent out to bring in a leprechaun for tax evasion. When Rachel captures the leprechaun, she decides to accept the three wishes from the leprechaun and let the creature go. Rachel uses her wish to be able to get out of her contract. She finds that her co-workers, Jenks the pixie and Ivy a vampire, want a wish also, and in return they will go with her and help her work off the bounty that they feel certain the head of the I.S. will put on Rachel for quitting.

Rachel is able to quit, but just as she was warned, there is a bounty put on her head. Rachel finds that she has been kicked out of her home and has to live in her new office with Ivy and Jenks. Rachel learns that a prominent businessman, Trent Kalamack, is suspected of dealing Brimstone drugs. Rachel decides if she gives Trent to I.S., she will be forgiven and the bounty dropped. Rachel begins to investigate and multiple death threats begin to pile up.

Rachel is able to sneak into Trent's office in the form of a mink but is captured. While Rachel is in captivity, Trent kills a man in front of her, and she learns that Trent is also a biodrug maker and distributor. Biodrugs were responsible for creating the Angel virus that nearly wiped out humanity and so it is a very illegal crime. Rachel, in the form of a mink, is put into a rat fight by Trent for humor, but Rachel is able to get away. Once home, she tells Ivy of what she has found and they make a plan to go to the FIB, Federal Inland Bureau, and tell them about Trent.

The FIB agrees to pay off the bounty on Rachel's head in exchange for Kalamack. Rachel is able to get them an informant and her bounty is paid off. Before the informant can be placed in protective custody, he is killed in an explosion. Trent is across the street watching. The next night, Rachel goes to sneak into Trent's office, fearing that if she doesn't get information on him she won't be safe. She learns while there that Trent believes Rachel has been summoning demons and so Rachel is safe. She is able to leave Trent's with Trent and his men in pursuit. Rachel and Trent have an undersanding and Rachel decides that is good enough for now.