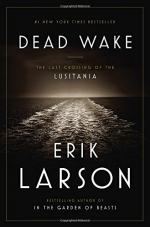 “Dead Wake” by Erik Larson tells the story of a fabulous steamship, the Lusitania. It was called the “magnificent ship” standing seven stories from dock to bridge and consuming coal at a rate of 140 tons a day while just standing still. This splendid example of man’s advancements in shipbuilding was a commercial vessel that carried passengers and cargo. While some of Britain’s private steamships had been converted for the war, the Lusitania had no connection whatsoever with the war or wartime maneuvers. However being an ocean liner for passengers wasn’t to be the reason why it became an important part of world history.

Just like the Titanic before it, the Lusitania was considered to be virtually unsinkable. It’s size alone was daunting; its image would scare off most warships that were smaller and barely faster than the swift steamship. It was fully capable of ramming and destroying a smaller ship. Besides while the Great War between Great Britain and Germany had been ongoing for years, there was a tacit agreement that neutral and commercial vessels were not fair game.

Despite an announcement from the German embassy which ran in the New York Times on May 1, 1915, warning that commercial vessels were vulnerable to attack in waters encompassed in the war zone, no one paid much attention. On the morning of May 1st, passengers boarded, luggage and cargo was loaded and the officers and crew of the Lusitania did their daily inspection of lifeboats and all systems of the gigantic ship. While the German warning didn’t rattle anyone about the dangers of taking the transatlantic journey from New York Harbor to Liverpool, England, perhaps the ship’s captain and crew and the passengers would have been alarmed to find out that a top secret unit called Room 40 working under British intelligence was tracking the movements of U-boats in British waters, especially U-20 which was the most notorious and ruthless of the German subs, and that there was great concern about the possibility of submarine attacks on British ships. A chill would have gone down the collective spine of all those on board the Lusitania had they known that the Germans specifically mentioned the Lusitania in a number of intercepted messages. But the British Admiralty, led by a young Winston Churchill, did not want to share the intel with the Lusitania captain because it might expose the existence of Room 40.

On May 7th, when passengers and crew could see the coastline of Ireland coming into view, the Lusitania was struck in its hull with one torpedo launched by U-20. In just ten minutes after being struck, all the systems on the Lusitania were inoperable. The rudder no longer functioned and all the lights were out. The elevators stopped, some filled with panicked passengers. The baggage workers down below in the hull were all dead or soon would be. Water began to seep through opened portholes. There were 70 opened portholes causing the starboard alone to take on water at 260 tons a minute.

The crew of the U-20 was jubilant that it had attacked the Lusitania, an important symbolic victory. The ocean liner that was too big to sink, sank in eighteen minutes. Over half of the people on board were lost. The Lusitania disaster was a pivotal event in the war and one of the stepping stones that led President Woodrow Wilson to abandon his policy of neutrality and eventually enter the war.

Ironically, Great Britain and Germany agreed on one important element in their conflict: each, for their own purposes, wanted America in the war. The British had been eager for America to enter the war as an ally and the Germans had been trying to lure them into the conflict by baiting them with attacks on their vessels. The tragedy on May 7, 1915, represented a strange confluence of the goals of these two nations. There remains a mystique about the Lusitania, unanswered questions that have never been resolved in a century and, at this point, never will be.