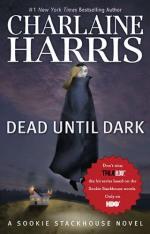 This detailed literature summary also contains Topics for Discussion and a Free Quiz on Dead Until Dark by Charlaine Harris.

Sookie Stackhouse is a waitress in rural Louisiana in search of something more. Though happy, Sookie is different from everyone else because she is a telepath. The concentration that it takes for Sookie to maintain daily life and not read the minds of those around her is intense, and as a result sometimes people around her think she is crazy. Sookie deals with this as best she can, but longs for the day when she doesn't feel so isolated.

A vampire arrives in Merlotte's, the bar where Sookie works, and changes her life. Fascinated by the possibilities, Sookie is thrilled to have a vampire in Bon Temps, her home town. Events require Sookie to save the vampire from people looking to profit from the sale of his blood, and Sookie comes to the rescue, saving Bill the vampire from the clutches of the Rattrays, Mack and Denise. Realizing she is unable to hear his thoughts, Sookie is thrilled for more than one reason to have met the attractive vampire.

As daily life continues, women are being murdered in Bon Temps, and they have ties to vampires. Some of the people in town wonder if Bill has anything to do with their deaths, but Sookie is sure of his innocence. As she spends more time with Bill and gets to know more about him, Sookie understands that Bill is tired of moving from place to place and wants nothing more than to settle in one place and make a home. Sookie's brother Jason is also a suspect in the murders, having been sexually involved with both suspects at one time or another.

Sookie becomes involved in Bill's life and meets other vampires, undead that sometimes make her question her attraction to Bill. Sookie's boss, Sam, also plays an important role in her life, admitting finally that he is attracted to Sookie, though in her opinion, he admits it too late. Sookie senses that there is something unusual about Sam, but is not sure what it could be. His thoughts are not clear to her like other people's; she can only sense his feelings.

Sookie's grandmother is killed and it becomes evident that the murderer is targeting people that are involved with vampires. Sookie had been the intended victim, but the killer had surprised Gran home alone. Sookie is more determined than ever to find the killer and clear the name of Bill Compton, as well as that of her brother.

Sookie decides to use her ability to hear others thoughts to find information about the killer. Her talent is called into use by Eric, a vampire at a bar in Shreveport, as well. Sookie realizes that the ability is not a disability as she had once thought. The waitress learns many things about the people around her, including the quality of the thoughts they have as well. Danger builds and Bill provides Sookie with a guard, a certain Memphis musician that had died many years ago, or at least most people believed.

Events come to a head and Sookie is alone; her bodyguard disabled by a drugged animal left as bait. Reaching out Sookie can only sense the thoughts of the person intent on killing her, the dark hate radiating toward her so deeply she can almost touch it. Sookie flees, trying to escape and is stunned to find that the killer is Rene Lenier, a family friend and former husband of her co-worker, Arlene. Rene's sister had been involved with a vampire and Rene had killed her as well. Now the man was determined to kill any woman that would consider a relationship with a vampire. Sookie manages to escape, injuring Rene and leaving him in the cemetery near her house. The man is arrested, after confessing to the police.

Sookie recovers from her battle for her life with Rene and is visited by Bill in the hospital. Bill had been in New Orleans, and had been elected the Fifth Area Investigator. Vampires were more organized than Sookie had realized. Bill had done this because he wanted to keep Sookie safe from Eric, who had shown more interest in her than Sookie or Bill liked. The fact that Bill now worked for what amounted to the vampire government might help.

The novel closes with Bill telling Sookie that their life can now get back to normal, and Sookie wondering what normal could possibly be.