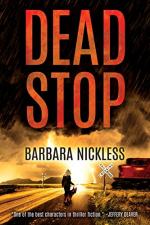 In the novel Dead Stop, the second book in the Sydney Rose Parnell series by Barbara Nickless, Officer Sydney Parnell and her colleagues search for the identity of a man who attacked the members of the Davenport family, killing twin boys, seriously injuring the father, Ben, and kidnapping the daughter, Lucy. Samantha Davenport, the mother, was bound to a wooden crossbeam and left on the train tracks where she was killed. Still reeling from her experiences in Iraq, Parnell was told by her therapist that it was central to her recovery that she forgive herself for what she had done in the war. Always needing to prove herself, Parnell staked her ability to forgive herself for the things she had done in the war on finding Lucy alive.

As soon as it was discovered that Lucy was discovered missing, Parnell and her K9 partner, Clyde, tracked Lucy’s scent to a defunct cement factory. The dog lost the scent and it was assumed someone in a car had picked Lucy and her captor up. While investigating the factory, Parnell discovered two dead bodies, an unusual alphanumeric code, and a quote, similar to ones written on the walls of the Davenport home, in a cement kiln. Clyde alerted Parnell of a trip wire on the entrance to the kiln with barely enough time for the two of them to get to safety. The bomb blast caused Parnell to have flashbacks to her time in Iraq and made her wonder if she was really capable of helping with the investigation. Despite her fears, Parnell got permission to stay on Lucy’s case. She remembered a young orphan boy in Iraq that she had been unable to save and believed perhaps she could forgive herself if she could save Lucy.

Parnell discovered that the alphanumeric code written in the kiln was the identification code for a railroad crossing nicknamed Deadman’s Crossing because there had been so many fatal crashes. A girl named Raya Quinn was the last person said to be killed at this crossing 28 years prior. When Parnell and her colleague, Madeline “Mac” McConnell, researched the crash they found evidence that Raya had not been killed by the train but had died by strangulation before the train hit her. Parnell and Mac visited Raya’s mother, Esta, who told them that Raya had a son, Roman. Roman had tortured Esta when he learned six months prior that Hiram Davenport was his father and that it was possible that Hiram had killed Raya. When Parnell saw pictures of Roman in his bedroom, she identified him as Jack Hurley, the man who had worked as Samantha’s assistant.

On Parnell’s way back to Denver Pacific Continental Railroad (DPC) headquarters, Parnell learned that Hiram was missing and his bodyguard had been shot dead. Parnell wished she could talk to Zolner, the railroad cop who had been at the scene of Raya’s death. Acting on a whim, Parnell visited the Royal Tavern and accused Delia of hiding Zolner. Parnell was right in her accusation. Zolner admitted to having killed Raya because he professed his love for her but she had laughed at him.

Having identified the person who killed Raya, Parnell tried to fit together the information she had about Roman to determine where he might have taken Lucy. Sensing from the items in Roman’s room that he had an obsession with the mining tunnels under the cement factory combined with Esta’s comment that her grandson was underground, Parnell headed back to the factory. She and Clyde located Hiram, Roman, and Lucy in the underground tunnels. With the help of Mac, Parnell rescued Lucy but Hiram was killed by Roman. Roman died of a gunshot wound inflicted by Mac.