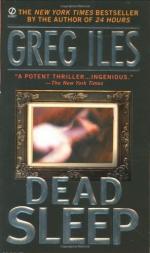 Greg Iles
This Study Guide consists of approximately 38 pages of chapter summaries, quotes, character analysis, themes, and more - everything you need to sharpen your knowledge of Dead Sleep.

This detailed literature summary also contains Topics for Discussion and a Free Quiz on Dead Sleep by Greg Iles.

DEAD SLEEP is a mystery thriller that follows photojournalist Jordan Glass as she investigates the disappearance of her twin sister, Jane, who she believes is the victim of a serial kidnapper and possible serial murderer. Working alongside the FBI, Glass is able to identify the murderer and narrowly escapes becoming a victim herself. As she unravels the mystery she not only learns that her sister is alive, but also discovers the truth about the apparent disappearance of her father several years before.

While in Hong Kong, Glass attends an art exhibition of anonymous paintings of nude women in poses that seem to show them sleeping or possibly dead. She is stunned to find one of the paintings seems to depict her missing sister. Convinced the unknown painter must be involved with her sister's disappearance, Glass flies to New York City to confront the art dealer Christopher Wingate, who represents the anonymous artist. Wingate is killed in a mysterious fire that is set while Glass is visiting him, however. She then teams up with FBI agent John Kaiser to investigate.

Using the FBI's forensic analysis methods, the investigators are able to match the models in the "Sleeping Women" paintings to a series of women who have disappeared in New Orleans and New York. Glass and Kaiser grow closer together as their investigation continues.

Analysis of brush hairs found in the paintings leads them to Roger Wheaton, an art professor in New Orleans and three of his students. Glass becomes a crucial part of the investigation as FBI agents use her resemblance to her sister to try to flush out the killer from among the four main suspects. Things do not go exactly as planned, however, as none of the suspects seem to be startled by her appearance, and all seem to be potentially involved in the disappearances. As two of the suspects are ruled out and one seems to become a kidnapping victim herself, it suddenly becomes clear that the least likely suspect, Roger Wheaton, is probably the killer.

Before the investigators can act, however, Glass herself is kidnapped and drugged by Wheaton, who reveals that he is indeed the painter of the "Sleeping Women" paintings, and that the models were kidnapped and murdered by him. Glass manages to escape from Wheaton with the help of Kaiser and the FBI. In the dramatic conclusion, she learns her sister is alive and that her kidnapping was part of an elaborate revenge plot connected to Marcel de Becque, a former friend of Jonathan Glass, their father. De Becque has been protecting Jane Glass in Thailand after her escape from the killer. The novel ends as Jane Glass is reunited with her husband and children who believe she is dead, and Jordan Glass embarks on a relationship with John Kaiser.

More summaries and resources for teaching or studying Dead Sleep.