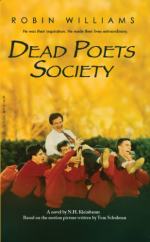 N.H. Kleinbaum
This Study Guide consists of approximately 38 pages of chapter summaries, quotes, character analysis, themes, and more - everything you need to sharpen your knowledge of Dead Poets Society.

“Dead Poets Society” is the story about a group of junior year boys at the Welton Academy, an exclusive private school for boys. The story unfolds during the opening ceremony for the new school year. The indoctrination is held in the school’s chapel. To the melodious sound of bagpipe music, four boys enter the chapel carrying banners. Each banner is inscribed with a word representing what the school stands for: Honor, Discipline, Excellence and Tradition. Parents seating in the pews are smiling, excited and proud of their sons.

Todd Anderson is a new student that year. He suffers from low self-esteem brought on by the outstanding academic performance of his older brother, Jeffrey, who was also a student at Welton. Todd feels, with good reason, that his parents favor Jeffrey and that he is little more than an afterthought. The Dean is less than tactful when he reminds Todd that he has big shoes to fill. Just what Todd needed to hear! Neil Perry welcomes Todd as his new roommate. Neil is a positive young boy whose domineering father has a future all planned out for Neil, but it’s not the future that Neil wants.

The conservative private school is steeped in tradition. But that tradition is about to have a huge challenge from one of its former students. John Keating has been hired by the school to become the new English teacher. He was a brilliant student, natural leader and a Rhodes Scholar. John always marched to the beat of a different drummer, a trait of the very bright.

John Keating basically turns aside the school’s curriculum and teaches the boys about poetry and life. He reads the poetry he loves and explains to the boys how it applies to real life. He encourages them to abandon tradition and be non-conformists and free spirits. A fellow teacher warns Keating that he may be setting the boys up for disappointment because not everyone can be an artist. Keating tells the teacher he missed the point. He is not telling the boys to be artists but to be free thinkers.

When the boys find out that Mr. Keating had formed a secret club called the Dead Poets Society when he was a student at Welton, they want to know all about it. Keating tells them that he and his friends established the club and that only dead poets could be members. Keating and his friends were just pledges. They met in a cave and read poetry, created gods and vowed to suck the marrow out of life. The boys are inspired to revamp the club and begin meeting in the same cave as Keating and his peers did years before.

When the school administration gets wind of the secret club – something that is against regulations – the dean promises to suspend any student who is a member. The dean is beginning to regret that he hired Keating because of his unorthodox way of teaching. He fears that it can come to no good end. When tragedy strikes, Keating is the perfect fall guy on which to place the blame. Keating is terminated over the incident. On his last day as the boys shout that Keating wasn’t to blame, the boys all stand on their desks in solidarity with him.