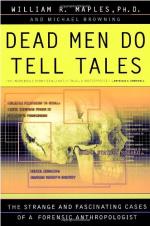 Plot Summary
+Chapters Summary and Analysis
Chapters 1-2, Every Day Is Halloween, Talkative Skulls
Chapters 3-4, Bolts of Bones, The Enfolding Earth
Chapters 5-6, Flotsam and Jetsam, When the Sickness Is Your Soul
Chapter 7-8, Outpacing the Fiend, Unnatural Nature
Chapters 9-10, A Sunless Place ..., Flames and Urns
Chapters 11, Death in 10,000 Fragments
Chapters 12-14, Lost Legions, The Misplaced Conquistador, Arsenic and Old Rough and Ready
Chapters 15-16, The Tsar of All the Russias, These Rough Notes and Our Dead Bodies
Characters
Objects/Places
Themes
Style
Quotes
Topics for Discussion
Order our Dead Men Do Tell Tales Study Guide

William R. Maples
This Study Guide consists of approximately 25 pages of chapter summaries, quotes, character analysis, themes, and more - everything you need to sharpen your knowledge of Dead Men Do Tell Tales.

William Maples is one of the United States' most important forensic anthropologists in the second half of the twentieth century. Dead Men Do Tell Tales: The Strange and Fascinating Cases of a Forensic Anthropologist is a mixture of Maples's most famous cases and the story of his career, beginning with his interests in forensics as a young man extending all the way to cases in the mid-1990s before his death in 1997. Maples's specialty is the human skeleton. His expertise is so widely known that he has the opportunity to study a number of famous skeletons, including those of Francisco Pizzaro, Tsar Nicholas II, Joseph Merrick also known as "The Elephant Man," and Ted Bundy.

Dead Men Do Tell Tales is for the reader with a strong stomach. The details of rotting skeletons, how the human body burns when cremated, the explanations of how murder weapons can be identified by the markings they make in human bones and the reconstructed murder cases are gruesome. However, they are an integral part of a tale about a man intimately connected to the human body and its core structure, the skeleton. Maples claims that he is not a religious man, but philosophical observations on the nature of evil pervade the book. While Maples never claims to understand the origin of evil, he is mystified by the evil he finds etched into the bones of victims and lying somewhere within the long-since decayed bodies of the bones of murderers that come into his lab. Maples is deeply existential about his skeletons, sometimes feeling deeply connected to them.

One of Maples's most important aims in writing the book is not to mystify the reader but to defend the science of forensic anthropology for its usefulness in solving historical mysteries and gruesome crimes. Maples sees his field as under attack by budget cuts and a lack of awareness of the usefulness of his craft. He claims that forensic anthropologists can more than pay for themselves in reduced court costs and that every state in the United States should have at least one on staff. More broadly, Maples sees his book as defending the use of science to understand human nature.

The book is composed in largely chronological order, with sixteen chapters. Chapter 1, Every Day Is Halloween, and Chapter 2, Talkative Skulls, introduce Maples, the main themes of the book and explain how he came to be interested in forensic anthropology. The remaining fourteen chapters tell particular tales, examining the forensic details of famous murders or particularly challenging crimes. Perhaps the most perplexing and lengthy chapter is Chapter 11, Death in Ten Thousand Fragments, which explains how Maples and his team reconstruct ten thousand bone fragments to help pin down the culprit of a murder-suicide. The chapters on famous studies are also interesting, such as Chapter 14, Arsenic and "Old Rough and Ready", where Maples shows to a high degree of certainty that American President Zachary Taylor was not poisoned by arsenic as he was thought to have been.

More summaries and resources for teaching or studying Dead Men Do Tell Tales.