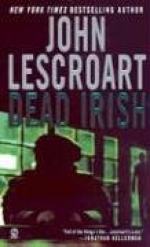 John Lescroart
This Study Guide consists of approximately 41 pages of chapter summaries, quotes, character analysis, themes, and more - everything you need to sharpen your knowledge of Dead Irish.

This detailed literature summary also contains Topics for Discussion and a Free Quiz on Dead Irish by John Lescroart.

Dismas Hardy looks into the death of Eddie Cochran at the request of his brother in law. Eddie had been found dead in the parking lot of a business associate under suspicious circumstances. Hardy does not believe that Eddie was capable of suicide, and during his investigation turns up several suspects with what he believes are valid reasons to murder Eddie.

Cochran had been working for a distributing company before returning to school to better himself. While working for Sam Polk at Army Distributing, Eddie had come across evidence that Polk had been arranging a drug deal. Eddie knew that Polk's finances were not what they once were because of the withdrawal of one of their biggest clients, and Polk needed money in order to provide for his new, much younger wife. Eddie, who has a strong sense of right and wrong, feels that it is his duty to try and stop Polk from following through with the deal. Eddie asked the opinion of those who mattered to him most, including his father and Father James Cavanaugh, the family priest. Father Cavanaugh reveals to Hardy that he feels responsible for Eddie's death, for encouraging him to stand up for what is right.

The daughter of Sam Polk, Linda, becomes a victim inadvertently when she helps her father's employee, Alphonse Page. Linda is needy, suffering from her perceived loss of her father's love after he marries again. Linda is killed when Alphonse strikes out at her under the influence of drugs, and the young man leaves her dead in her father's office.

Dismas Hardy, who had withdrawn from life after the death of his infant son, becomes entangled in the investigation of Cochran's death, drawing his former partner, Detective Abe Glitsky into the affair. Glitsky is risking a promotion to lieutenant by helping Diz, but also feels that there is something wrong with the death of Cochran. During the investigation Hardy begins to realize that his withdrawal from life had been a mistake, and along the way Diz begins to care again, no longer afraid of feeling. Reuniting with his former wife, Hardy discovers that the life he had put on hold in order to avoid pain was still waiting for him, and that it was not as painful as he had believed.

The suspects are eliminated and facing a wall Dismas is almost at the point of giving up when small pieces of information click into place pointing to the truth. Acting on instinct, Hardy points the police in the right direction but they are no longer willing to put themselves on the line. Father Jim Cavanaugh kills again in order to protect himself, and is almost successful in killing the youngest son of his one true love, Erin Cochran. Hardy prevents disaster at the last minute, and the priest kills himself, knowing that he has destroyed what he had coveted, and would never have what remained.

Dismas Hardy begins his life once again, returning to life as the result of the death of another; a man who at the outset Hardy had believed a dreamer, but had turned out to be much like Hardy himself.

More summaries and resources for teaching or studying Dead Irish.