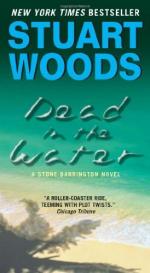 Dead in the Water Summary & Study Guide includes comprehensive information and analysis to help you understand the book. This study guide contains the following sections:

This detailed literature summary also contains Topics for Discussion and a Free Quiz on Dead in the Water by Stuart Woods.

Dead in the Water by Stuart Woods is another novel featuring cop turned lawyer, Stone Barrington. In this novel, Stone is in St. Marks to vacation on a chartered yacht with girlfriend, Arrington Carter. Unfortunately, Arrington is detained in New York. While alone, Stone sees a woman pull into the harbor alone and watches as she is arrested for unknown reasons. With nothing better to do, Stone becomes involved in the woman's case, eventually representing her against charges she murdered her husband. Dead in the Water is a thriller that has so many twists and turns that the reader will be on the edge of their seat until the final page.

Stone Barrington arrives in St. Marks alone on what was supposed to be a romantic winter vacation with his live-in girlfriend, Arrington Carter. In fact, Stone had planned to ask Arrington to marry him on this vacation. However, a snowstorm and an exclusive interview with Hollywood heartthrob, Vance Calder, leaves Stone alone. While still hoping Arrington will show up, Stone witnesses a woman pulling her yacht into the harbor alone. Within minutes, police are swarming the boat and the woman is taken into custody. Curious, Stone makes inquiries and learns that the woman's husband died at sea.

Stone attends the coroner's inquest just because he has nothing better to do. However, it immediately becomes clear to Stone that the local minister of justice has his eye on the Prime Minister's office and wants to use this case as a stepping stone. During the lunch break, Stone pulls the widow, Allison Manning, aside and offers to represent her in the matter. The woman agrees and Stone quickly gives her a few pointers to use during testimony. Back at the inquest, Stone asks permission to represent Allison and asks her a few questions that cast shadows on the minister of justice's case. Unfortunately, this was not enough for the jury to rule death by natural causes. Instead, the jury makes a ruling that allows the minister of justice the leeway he needs to bring charges of murder against Allison. Stone attempts to get Allison off the island, but she is arrested before she can board the plane.

Allison Manning claims her husband, famous novelist Paul Manning, died of a heart attack while hoisting her up the mast of their boat in the middle of the Atlantic. The minister of Justice, Sir Winston Sutherland, found a notebook that he claims is a diary that suggests Allison and her husband were not getting along and Allison had become homicidal. Allison claims this notebook represents only notes for a new novel that Paul was planning to write. As part of Allison's defense, Stone plans to find someone who can testify in such a way as to support Allison's version of things. Stone also plans to create a media blitz that will place enough pressure on Sir Winston that he will think twice before taking on Allison Manning.

The media blitz brings hundreds of reporters to the small island, putting Allison on the front page of dozens of newspapers and television news programs. However, Sir Winston is not quite as intimidated as Stone had hoped. Sir Winston has each and every reporter removed from the island. Only two remain, including a man who claims to have known Paul Manning and who is willing to testify on Allison's behalf. At the same time, all this publicity has alerted friends and family members of Paul Manning, including his ex-wife, Elizabeth Manning, who comes hoping to get some money out of her ex-husband's estate. Stone bribes the ex-Mrs. Manning with a large sum of money, quickly getting her on a plane out of town. Unfortunately, that plane crashes on the way to Antigua.

When the trial begins, Stone feels he has a strong case. In fact, the case against Allison is highly circumstantial while Stone's case is strong. Stone is confident up to the last moment when the jury convicts Allison for the murder of her husband. Allison is sentenced to hang. Stone and Allison wait on pins and needles for the prime minister to rule on the appeal. Unfortunately, no word comes before the time set for the hanging. Allison is hung. Stone returns to Allison's boat, defeated, only to learn that Allison did not hang. In fact, Allison bribed the prime minister and has been allowed to escape from the island. As Stone euphorically makes his way home on the yacht Allison has given him to pay his legal fee, he realizes that Paul Manning was not dead at all. In fact, Stone is able to prove that his star witness, a journalist for the New Yorker magazine, is in fact Paul Manning. Stone has Paul Manning arrested and returned to St. Marks for causing the engine fire that ended the lives of three people on Libby Manning's flight to Antigua.

Dead in the Water from BookRags. (c)2022 BookRags, Inc. All rights reserved.