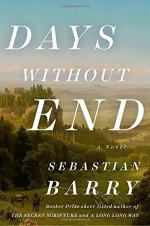 Sebastian Barry
This Study Guide consists of approximately 64 pages of chapter summaries, quotes, character analysis, themes, and more - everything you need to sharpen your knowledge of Days Without End.

Days Without End: A Novel Summary & Study Guide includes comprehensive information and analysis to help you understand the book. This study guide contains the following sections:

This detailed literature summary also contains Quotes and a Free Quiz on Days Without End: A Novel by Sebastian Barry.

The following version of this book was used to create this guide: Barry, Sebastian. Days Without End. London: Faber & Faber, 2016.

Set in America during the 1850s and 1860s, the novel opens with the narrator, Thomas McNulty, recounting his younger years as a soldier in the Indian wars. Thomas is originally from the port town of Sligo, Ireland, but he lost his family during the Great Famine. As a 13-year-old orphan, he joined a wave of Irish emigrants who travelled to America in search of a better life, a grueling journey that took him first to Canada before settling in Missouri. Thomas meets a boy his age, John Cole, when they both seek shelter under the same hedge. From this moment onwards, they become inseparable. They travel together to a mining town called Daggsville, where they are hired to dance and act like women in a saloon owned by a man named Titus Noone. Thomas and John Cole’s friendship deepens into an intimate relationship, which they hide from the public.

When Thomas is 17, the pair enroll in the army. They are commissioned to fight in the Indian wars, a series of armed conflicts against Native American groups. One of their first attacks is on the Yurok people, prompted when some European settlers in the nearby town of Fort Kearney complain about them. The attack is brutal and violent, but Thomas finds this oddly satisfying. When they are not fighting, the troopers pass the time by playing cards and bonding, which helps them forget their hunger and make it through the cold winter.

One day, the troop encounters the Oglala Sioux tribe. The chief, Caught-His-Horse-First, generously offers them meat, which helps them make it through the harsh winter ahead. Some soldiers get frostbite and die a few months later, and the troopers make sure to honor their dead compatriots. One of them, Trooper Watchorn, undergoes an elaborate embalming process after his death; Thomas' visceral memory of this moment is described both in the opening of the novel and in a later chapter. The troop relocates to Fort Laramie, where there is a great gathering of government officials, Native American chiefs, emigrant representatives, and troops. The leaders negotiate, and the event concludes when the troop’s major, Tilson Neale, signs a treaty with the Sioux leader, Caught-His-Horse-First. The treaty is violated when two emigrants trespass Sioux territory, and are subsequently killed by some Sioux men. This triggers a deep-seated feud between the troops and Caught-His-Horse-First’s band.

Some years pass and Thomas bonds with one of Mrs. Neale’s students, who is Caught-His-Horse-First’s niece. He names her Winona since that is the only Native American name he knows. Thomas and John Cole are discharged when the latter becomes ill, and Thomas takes Winona with them to be their servant apprentice. They soon grow fond of her and treat her like she was their own child. The three of them move to the town of Grand Rapids where they reunite with Titus Noone. They perform in his entertainment hall to earn money, which requires Thomas to play a woman like he used to in his teenage years. The show is successful and Thomas, John Cole, and Winona buy a house and settle down as a family. Thomas often wears dresses when he is alone with them, as he starts to feel more comfortable in them than in men’s clothes.

When the Civil War begins, Thomas and John Cole decide to join the Union army in Massachusetts, where they reunite with the major and some of their old comrades. The troop is dispatched to fight the Confederate army in North Virginia. The battles are bloody and brutal, but Thomas and John Cole manage to stay alive. One day, the Rebels attack their regiment without warning and Union troops are forced to surrender. Thomas and the other soldiers are held as prisoners in Andersonville for many months. They live in grisly conditions and the lack of food affects even the camp guards. The black prisoners are killed en masse, and white prisoners are threatened if they help them. Thomas and John Cole are finally set free when the Federal government negotiates a prisoner swap. They reunite with Winona in Grand Rapids and are nourished back to health. The war officially comes to an end.

Thanks to Thomas’s convincing crossdressing-turned-alter-ego (a female version of himself whom he names Thomasina), he and John Cole marry. They receive an invitation from their old comrade, Lige Magan, to move to his farm in Paris, Tennessee. They accept but are attacked on the way by a gang of Rebel soldiers, and Winona is almost killed. They finally arrive at the farm, where they live peacefully for some time with Lige, his partner Rosalee, and her brother Tennyson. The gang of Rebels find them and attack the farm, but most are killed thanks to Lige’s sharpshooting abilities.

Starling Carlton pays a surprise visit to the farm in search of Winona. He explains that Caught-His-Horse-First kidnapped the major’s wife, Mrs. Neale, and their two daughters. Mrs. Neale and one of the daughters were killed, but the other daughter was spared in exchange for his niece, Winona. Thomas and John Cole refuse to let her go, so Starling Carlton kidnaps her the next morning. Thomas goes after them and finally reaches the fort, where he tries to speak to the major about saving Winona. Seeing the major stricken by grief, Thomas is unable to find the words to ask for Winona back. The hostage exchange thus takes place: the major’s daughter is returned, and Winona is given back to Caught-His-Horse-First. But this peaceful settlement does not last. Consumed by rage and grief, the major orders the troop to ruthlessly kill all members of Caught-His-Horse-First’s village. Starling Carlton threatens to kill Winona, but Thomas kills him to protect her. Disguised as a woman, he flees fort with Winona and they return to the farm.

Fearing that the troopers may come after him for killing Starling Carlton, Thomas happily maintains his disguise. He realizes that he feels more himself as a woman than as a man. Corporal Coulson, one of the regiment’s leaders, comes to the farm to arrest Thomas for desertion. Although he at first plays along with Thomas’s disguise, he nonetheless recognizes him and urges Thomas to turn himself in to the authorities. Unable to find a solution, Thomas gives in and is sent to prison. During his trial, a witness recongizes him as Starling Carlton’s murderer and he is sentenced to death. As Thomas awaits his execution, the major visits him in his cell. He explains that he defended Thomas’s case to the federal government and managed to revoke the death sentence in exchange for a hard labour sentence. Grateful and relieved, Thomas serves his time and returns to Tennessee, where he reunites with John Cole and Winona.

More summaries and resources for teaching or studying Days Without End: A Novel.

Days Without End: A Novel from BookRags. (c)2022 BookRags, Inc. All rights reserved.