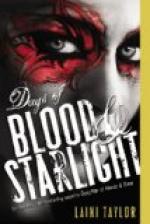 "Days of Blood and Starlight" by author Laini Taylor is a fantasy novel about the battle for peace in the midst of a constant and horrible war. In the world of Eretz, two races have been battling each other since time before memory. The seraphim are angelic humanoids with the ability to fly, but they are just as capable of cruelty as any human. The chimaera are demonic-appearing creatures that have been battling the seraphim for reasons unknown, but inside, they are just as human as the seraphim. Before the novel, a seraph named Akiva fell in love with the Kirin female Madrigal, and they were discovered by The White Wolf, who desired Madrigal's love. As retribution, he executed Madrigal in front of Akiva, and in his rage, revealed to the seraph that the chimaera had the ability to bring back the dead. Akiva survives this encounter and returns to his people, leading them to return to Loramendi, the great city of chimaera. The angels destroy the city completely, and commence destroying all the land controlled by the chimaera.

However, Madrigal's spirit has survived and lived on in human form, in a girl known as Karou to her friends, Zuzana and Mik. The novel opens just as Karou has disappeared after Akiva and his Misbegotten siblings come after her near a bridge in Prague. Karou flees to help the surviving chimaera regroup, and as she is the only one left amongst them capable of resurrecting the dead, Thiago, The White Wolf must tolerate her existence, though he plans to kill her as soon as possible.

As the war continues, Akiva begins to resent his own decisions that led to the destruction of the innocent chimaera. His siblings sympathize with his feelings, and soon begin to help him as he actively warns chimaera of their approaching armies. Thiago, on the other hand, begins sending his warriors into the seraphim empire to slaughter innocents as well, and the war continues to escalate. Akiva comes to realize that the only way he can stop the killing is by assassinating the emperor, which he and his siblings Hazael and Liraz manage to accomplish. Their victory does not last, however, as emperor Joram is quickly replaced by his even more dangerous brother Jael, who has intentions to travel to Earth and use the fighting technology on the distant planet in order to conquer the entire world of Eretz.

Joined by her two human friends Zuzana and Mik, as well as another chimaera friend Liraz whom she thought permanently dead, Karou finds the strength to stand against Thiago, but nearly loses her life in the process. The evil warlord attacks her viciously, and she manages to kill him just as Akiva appears before her with his sister and slain brother Hazael. The Dominion follows them quickly, and the group must prepare for an even greater war.